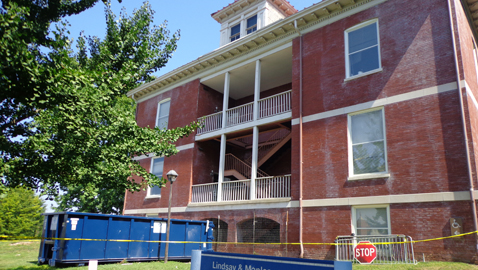 A small change is coming to one of the most historic buildings in downtown Knoxville. You’ll probably not notice what’s happening there but, in fact, the change will take the building to its early appearance.

Recently the Historic Zoning Commission approved of enclosing an exterior recessed area on a building at what is now the LMU Duncan Law School. The complex, on the corner of Summit Hill and Broadway, was built in the 1840s as part of the Tennessee School for the Deaf. The buildings housed Knoxville City Hall from 1925 until 1980.

A construction crew member who is involved in renovating the building told The Focus that the stairs in the recessed exterior space will be removed and an elevator installed. Kaye Graybeal, of the Metropolitan Planning Commission, told the BZA that a former student and past secretary of the old City Hall identified the recessed area as originally a “sleeping porch.”

Knoxville merchant Calvin Morgan donated the property for the original buildings and, during the Civil War, the complex was occupied by the Confederacy and used as a military hospital and an artillery battery was on the lawn. After the war, classroom buildings, an auditorium and a chapel were added.

The School for the Deaf moved out of the complex in 1924 to its current location at Island Home.

The City of Knoxville bought the buildings and held the first meeting there in 1925. Later the 8 acre property was divided up, a parking lot added, and Summit Hill Towers built. In 1980 the city government moved to the City-County Building and, in 2008, Lincoln Memorial University leased the building for its new law school.