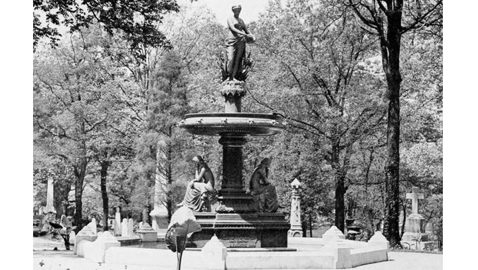 Many improvements are underway at the Old Gray Cemetery in downtown Knoxville and additional funding is needed to top off an effort named “Trees, Trails and Traditions.”

Russell B. Kuhlman, president of the board of directors, notified members and the public by mail recently of the effort noting that 75% of the $650,000 goal has been reached with the hopes of beginning the project this coming spring.

“The goal is to replace existing roadways, turn some roadways into green space, treat and protect our 150-year-old trees, repair and replace cemetery gates and replicate the beautiful Ella Albers Fountain,” Kuhlman said.

The first burial in the cemetery was in 1851 for a man killed in a July 4th Celebration when a cannon exploded. Since then the cemetery has grown and now includes many graves of well-known Knoxvillians including members of the Maynard, McClung, Brownlow, Kern, Rule, Mabry and Houk families. The cemetery contains graves of Civil War soldiers of both sides and is a favorite walking place for many residents.

Kuhlman’s letter summarized the efforts of the Old Gray Cemetery Educational, Historic and Memorial Association over the past year. He noted the passing of Alix Dempster, the Executive Director, whom he called “the face, heart and brain of Old Gray.”

A commemorative plaque was unveiled honoring Alix and her mother in-law, Katie Dempster, for 62 years of dedicated service.

The campaign to publically launch the $650,000 project includes plans to replace the fountain and statue. The Ella Albers Fountain once stood 20 feet high and weighed 4 tons.

Mr. Kuhlman also noted that the cemetery was assisted this past year as the host of Knoxville Garden Club’s annual Weed Wrangle and the club worked to remove intrusive ivy, privet and brush honeysuckle and improve the looks and reduce areas prone to vandalism.

Knox Heritage held a sold out summer supper on the cemetery grounds which brought new visitors and great exposure for the cemetery.

The board’s 16th Annual Lantern Tour was attended by more than 300 people and the group reached out to media and social media to educate the public on the purpose and heritage there.

A workday at the cemetery saw volunteers come all the way from the Mountain Home Veterans Cemetery in Johnson City. It was a day-long effort to upright over 40 grave stones, cut back shrubs and dead trees, rake leaves and trim around the perimeter.

“We have increased security measures at the cemetery, working with the Volunteer Ministry Center next door to be a watchful neighbor and with the Knoxville Police Department which routinely patrols the cemetery,” the board president reported.

“I am excited about the future of Old Gray and hope that you will consider an additional gift to help us ensure the historic cemetery remains intact for future generations. Please help us to honor Alix and her love for old Gray,” Kuhlman said.