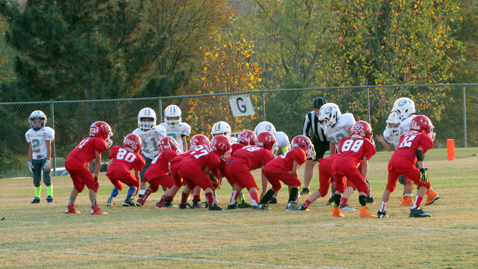 Youngsters from Gibbs and Halls got their first taste of one of Knox County’s top football rivalries this season.

“A big one,” answered Gibbs quarterback Clay Phillips when asked if there was a rivalry between the two bordering communities after Halls came out on top 20-13 in the Knox Metro Youth Football League’s NFC title game last week at John Tarleton Park.

“They’re close together and almost play every year.

“And I go to school with some of them, too.”

Jordan Dyer, who plays for Halls, is a second grade classmate at Gibbs Elementary. Another Halls player, Wesley Wise, goes to the same daycare after school.

Curtis Berkley, the Halls coach, said, “It’s Gibbs, Central and Powell. We tell them to get ready for that, because they’re going to see them until they’re 18.”

Gibbs shut out Halls 6-0 in their regular season game, but the Red Devils avenged that loss in the title bout. The Junior Hopper division is the youngest division that plays “tackle” football in the KMYFL.

Jaxton King led the way for Halls in the championship game and scored what turned out to be the winning touchdown on a 35-yard run around right end late in the third quarter, after having two long TD runs nullified by holding penalties.

Gibbs had taken a 7-0 lead in the first quarter and still led 13-6 until the Red Devils pulled into a 13-13 tie just before halftime.

“It was tough out there,” said Clay. “We came out ready and looking like we could beat them, but it got harder and then we fell apart in the second half.  We had a chance to win it, but we didn’t.”

Does it hurt to lose?

“Yes in the championship,” replied Clay. “But in the regular season not that much.”

Tucker Owenby scored on an 8-yard run and Camden Beeler ran in for the extra point to give Gibbs its early lead.

King scored his first TD for Halls on a 17-yard run with 1:04 left in the opening quarter, but Lukas Denney pulled down quarterback Hudson Limbaugh on the PAT to keep the Eagles ahead by one.

Beeler went 41 yards on a reverse before going out of bounds at the Halls 4 early in the second quarter. He eventually scored on fourth-and-goal from the 5. The Eagles failed to convert the PAT but led 13-6.

Halls’ Gavin Cantrell, on third-and-20, broke loose for a 30-yard touchdown run with 36.5 seconds left in the half. The Eagles’ Waylon Spierdowis dove in vain to stop him. Limbaugh’s keeper on the PAT tied the game 13-13.

After Halls took the lead and the clock was running down, Gibbs tackle Seth Seiber stopped King just short of a first down to get the Eagles the ball back for one last chance.

With 16.6 seconds remaining, the Eagles had the ball at the Halls 43. But the Red Devils rushed in and tackled Beeler for losses on the game’s final two plays to wrap up the championship.

What did it take for you all to win this game?

“We made a lot of good plays when we needed them,” he said.

“I like tackling people,” said Travis, who made one of the hardest hits in the game when he tackled Beeler just before halftime.

How many tackles did you have tonight?

Coach Berkley said it was great to bring a championship back to Halls.

“It’s good to see hard work rewarded and good to see a bunch of boys love football,” he added.

“They didn’t quit. We had a couple of bad breaks go against us early, some difficult penalties we had to overcome, but they just kept fighting and plugging away and that made the difference.”

Gibbs Coach Chad Phillips felt his team had the momentum when it scored early in the game.

“After that, for whatever reason, we just couldn’t block them,” he said. “They were blowing up the middle. We tried different plays – inside, outside, reverses, trick plays – it just seemed like they read everything we were doing.

“But give credit to them. That’s a good football team and they deserve everything they got. But I couldn’t be more proud of my boys. We played hard and that’s all I can ask.”

There will be more battles to come. The old rivalry is just getting started again.