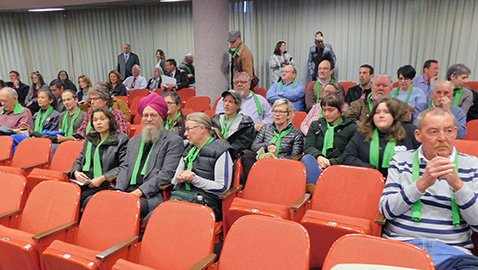 What a disappointment it must have been for the dozens of people who attended the Knoxville City Council meeting Tuesday night only to find out their objection to a proposed 230-unit residential development in their neighborhood would be postponed until next month.

The Old Sevier Community Group had urged a large turnout and the homeowners who attended each wore a green tie to show their unity. Prior to the council meeting Keith Vestal Jones wrote to the city saying the Board of Zoning Appeals-granted variance approved a “big box” design that is inappropriate for the neighborhood.

“The big box design will be nothing more than a four story wall that extends for blocks,” he wrote, adding, “The development walls off the park effectively.”

“Please support our request to save the South Waterfront by upholding the Vision Plan and overturning the variances,” he asked.

The development would consist of 230 multi-family units in 10 buildings and two small commercial spaces and, according to the BZA application, “will create a contemporary identity for the South Knoxville Waterfront.”

Some residents charge the development, proposed to sit between Waterfront Drive and Langford Drive, violates the City Code and the Vision Plan.

While an attorney was planned to speak for the residents, who turned out in force, the objections were not to be heard yet. One of the objections is that the four-story development would block off many homes from the waterfront view. Another objection is that the Dominion Group has no “hardship” and is not being denied appropriate use of the property there.

Councilwoman Stephanie Welch, who represents the area but is leaving her seat soon to become part of Mayor Indya Kincannon’s administration, moved to postpone any council decision on the appeal for four weeks. She also recognized that “there are many people here tonight” who came with interest in the matter.

Councilwoman Seema Singh, who was absent from the meeting, chimed in with an email to the opponents, noting, “There are many aspects of this development that I feel uncomfortable about. I think there are more conversations and compromises that should take place before a decision is made.” The postponement passed 8-0. The area neighbors abruptly left the meeting.

Obviously the residents in the area will continue to push for overturning the BZA decision to grant variances to the project development.