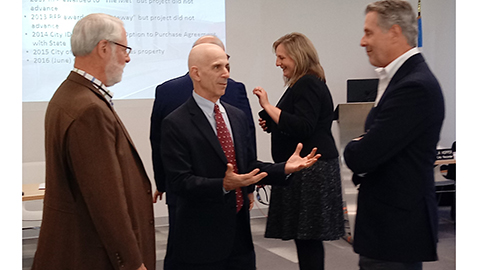 Empty for years the complex takes up a block of downtown between Henley, Cumberland, Locust and Church Streets, opposite the Knoxville Convention Center. Deputy Mayor Bill Lyons spoke to the council’s special work session about the project last Thursday.

Lyons detailed the building’s history beginning in 2005 when the state agreed to work with the city for the municipality to acquire the building. He said two previous proposals fell through for development before the city finally acquired it in 2015. Last year Dover submitted a proposal which was approved and then amended earlier this year.

The council got its first look at concept drawings and Lyons said that the final closing of the agreement will come in December with construction starting next year and being completed in 2022.

Dover called the renovation and construction there a “very dense project” and noted that final financing has not yet been acquired.

He said that, working with the city, much of the plans for office, retail, etc. has been moved to the Henley Street side, noting that all the other buildings along that route have “their backs to the street.”

He spoke about parking being reduced and said a traffic study is underway.

“Experience of the guests is very important,” he said.

Dover said the hotel part of the project, which he’s calling the “Courthouse Hotel” will include the historic façade of the old building and contain about 170 rooms.

Carlyle, who attended school in Knoxville and lived here for 24 years, said he’s excited about what downtown Knoxville is becoming.

He said the apartment section will have 230 one and two bedroom units and the Henley Street side on ground floor will contain an outside coffee shop, leasing office, bike shop, lounge and a pet spa for apartment dwellers.