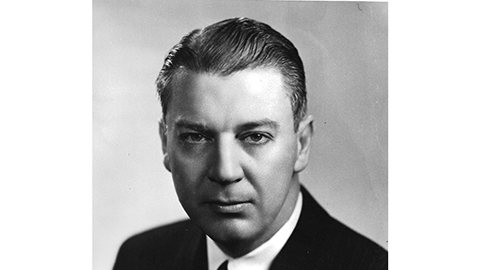 Perhaps the best lesson for aspiring politicians is that fame and success are fleeting; despite whatever heights one might attain, once out of office, one usually receives little attention and it is not long before one is forgotten.  How many Tennesseans remember Congressman Joe L. Evins?  Likely very few, but Joe L. Evins enjoyed a successful and long Congressional career before retiring in 1976 to make way for a young Albert Gore, Jr.

Joe L. Evins was born October 24, 1910 in DeKalb County, Tennessee.  Evins was born into fortunate circumstances, as his father, Edgar Evins, was both a successful politician and businessman.  Evins’ fortunate circumstances allowed him to attend Vanderbilt University and the Cumberland College of Law.  Evins commenced the practice of law in 1934 in Smithville, Tennessee.

Edgar Evins was a state senator and a strong supporter of Tennessee’s powerful senior United States senator, Kenneth D. McKellar.  When young Joe L. Evins was named as a staff attorney for the Federal Trade Commission in 1936, the appointment was almost certainly made through the influence of Senator McKellar.  Evins eventually became an assistant secretary at the FTC, a promotion also probably made possible by McKellar.  Edgar Evins’s ties to McKellar went back years and once when young Joe was traveling, McKellar’s Senate office helped with the arrangements.

Joe L. Evins interrupted his career in Washington, D. C. to enter the Army with the coming of World War II.  Evins, with his legal background, was assigned to the Judge Advocate General Corps.  Evins remained in the Army until 1946, when he returned home to Smithville.

That was also the same year Joe L. Evins began his political career in earnest.

The incumbent Congressman for the Fifth District was Harold Earthman.  Earthman had been the County Judge for Rutherford County, the most populous county in the Fifth Congressional district.  Earthman had been first elected in 1944 and had not yet established a hold on the affections of the people he represented and Joe L. Evins sensed an opportunity.

Evins announced his candidacy and began an energetic campaign to win the Democratic primary.  Evins, realizing McKellar had been quite friendly with Congressman Earthman, did his best to keep the senator out of the primary contest.

Evins was successful in neutralizing McKellar, who was very fond of Joe L. Evins’s father.

Earthman was something of a controversial figure and had a very strong personality.  Joe L. Evins could talk to anybody and made friends everywhere he went.

Evins won a smashing victory over Harold Earthman and would remain in Congress for the next thirty years.  Evins demonstrated his popularity by defeating an incumbent with 58% of the vote.

Evins was to become one of the more powerful members of Congress and proved to be enduringly popular inside his Congressional district.  Evins was routinely reelected with little or no opposition.

A compact, well-groomed man who favored double-breasted suits even into the 1970s when they were long out of fashion, Joe L. Evins remained something of a figure from Tennessee’s past.  Still carrying a hat, his hair carefully combed and slicked back, Joe L. Evins, a charming man, was the quintessential old-time Southern Congressman.

Congressman Evins could certainly tell a story and I well recall his telling me the 1952 senatorial campaign gave him some trouble.  Senator McKellar was seeking an unprecedented seventh term and was challenged by Congressman Albert Gore, a good friend of Evins.  The Congressman’s father, Edgar, was according to his son, an absolute “McKellar man.”

“He would have supported McKellar as long as they both lived,” Joe L. Evins told me with a laugh.

When Edgar Evins found out his son was very quietly supporting Albert Gore, he was “mighty mad.”

“I thought Dad was going to stop speaking to me for a while,” Evins said.

Eventually Edgar Evins got over being mad and remained intensely proud of his son until the end of his life.

Congressman Joe L. Evins, in the tradition of Senator K. D. McKellar, watched over his district and his people carefully.  Evins used his perch in Congress to bring back projects and dollars for the Fifth District.  His home city of Smithville, for instance, was the smallest city in the country included in the Model Cities Program, one of President Lyndon B. Johnson’s Great Society initiatives.

Evins had originally been on the Veteran’s Affairs Committee and was not eager to change assignments.  He had risen to the ranking member of the committee, but when Congressman Albert Gore was elected to the U. S. Senate in 1952, Tennessee was left without a member on the House Appropriations Committee.

Congressman Evins was urged by his colleagues in the Tennessee Congressional delegation to seek a seat on the Appropriations Committee and he reluctantly agreed.  It proved to be very beneficial for Evins’s district and Tennessee.

Congressman Evins was one of the few Tennessee Congressmen who refused to sign the infamous “Southern Manifesto” in the 1950s, despite being one of the more conservative Democratic members of Tennessee’s Congressional delegation.

Evins was the sponsor of the national Vocational School Act, as he realized not every student had the potential or interest in attending an institute of higher learning.  That particular act provided federal funding in more than 3,000 counties in the United States where school systems did not have an operational vocational program.

Congressman Evins also believed an improved vocational program would not only help young people, but those adults who had lost their jobs and needed a new trade and allow them to once again enter the job market.  It also afforded other adults the opportunity to improve their own skills and get a form of continuing education.

Although a strong Democrat, Joe L. Evins worked closely with Republican Congressmen Jimmy Quillen and John J. Duncan.  Evins was not a political partisan when it came to doing things for Tennessee.

Congressman Evins also found the time to pen a book, Understanding Congress, which was a remarkably good book in describing the workings of Congress.

Evins could indeed be a partisan Democrat and by the 1960s the Republicans were beginning to challenge the long domination of Volunteer State politics by the Democratic Party.  In 1964, both of Tennessee’s Senate seats were up for election, due to the death of Senator Estes Kefauver.  Both Albert Gore and Congressman Ross Bass faced determined opposition from Memphis businessman Dan Kuykendall and Huntsville attorney Howard Baker, respectively.  Joe L. Evins managed the Tennessee campaign for the Lyndon Johnson – Hubert Humphrey ticket.  He also did all he could to help both Senator Gore and Congressman Bass.

Tennessee had voted for the GOP presidential candidates in the last three elections; Eisenhower had carried Tennessee in 1952 and 1956 and Richard Nixon had won the Volunteer State in 1960.  Evins was delighted when his friend Lyndon Johnson defeated Barry Goldwater in 1964, winning Tennessee along the way.  He was also pleased with Senator Gore and Ross Bass’s victories in the Senate races.

Tennessee’s politics were changing and the 1964 election would be the last big victory for Democrats for sometime.  Although Buford Ellington returned to the governor’s mansion in 1966 after a bitter primary with John J. Hooker, Howard Baker defeated Governor Frank Clement for the United States Senate after Clement had beaten incumbent Ross Bass in the Democratic primary.  By 1971, Republicans would occupy the governor’s office and both of Tennessee’s seats in the United States Senate.

By 1973, Republicans held a majority of Tennessee’s Congressional seats.

That would change in 1974, a disastrous year for the GOP following the Watergate scandal and the fall of Richard Nixon.

Joe L. Evins decided against running again in 1976 and announced his retirement from Congress.  At the time he held the record for the longest continuous service of any Tennessee Congressman.  Evins’s retirement allowed Albert Gore, Jr. to begin his own political career and he won a hotly contested primary to succeed Joe L. Evins.

Evins briefly served in the administration of Governor Ray Blanton and then retired from public life, although he continued to be active.  Even as a former Congressman, Joe L. Evins continued to promote his home of Smithville and Middle Tennessee.  Evins worked just as hard to promote festivals native to Tennessee as he did to recruit businesses to Tennessee and jobs for Tennesseans.

Joe L. Evins had also married well; his wife Ann was the daughter of a judge and their union produced three beautiful daughters.  Joe’s brother was very prominent in the banking industry in Middle Tennessee and a nephew later founded the Cracker Barrel restaurant chain.  By all accounts, his personal life was a happy one.

Joe L. Evins, after a very active and productive life, began to slow down.

Joe L. Evins was truly the last of the old time Congressmen from Tennessee.