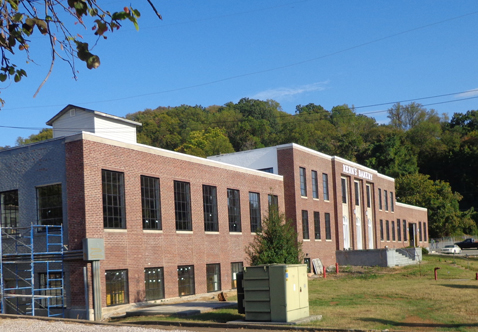 The resurgence of downtown Knoxville is underway and several vacant buildings are in various stages of renovation. Recently the city-owned Tennessee Supreme Court Building received four bid proposals, the former Phoenix Hotel and the historic Knoxville High School are in the midst of restoration, and the Pryor Brown Parking Garage looks as if it may be reworked for apartments and retail stores.

The Burlington Commercial District is being considered for renovation and buildings there are being looked at adding it to the National Register of Historic Placess. The city is hoping to restore the former Sanitary Laundry.

Knox Heritage has listed some of the buildings in their annual “Fragile 15” list along with places like Rule and South High School, the Eugenia Williams House, Estabrook Hall, The Sterchi Mansion, the Cal Johnson Building, the Knoxville College complex, Fort Sanders House and Grocery, and the Joseph Knaffl House.

The resurgence of the use of old and historic buildings, many for use as apartments, senior living and retail business, has had some major successes and led the progress downtown.

One of the notable successes is the rebirth of the Kerns Bakery Building on Chapman Highway. The Art Deco structure has 90,000 square feet of space and was built in 1931 not far from the Henley Street Bridge in South Knoxville.

Local citizens and elected officials got their first look inside the renovated Kerns Bakery earlier this month when the City of Knoxville hosted a presentation of its plans for the Fort Dickerson Quarry, the Civil War Fort and the Knoxville Battlefield Loop. Hundreds attended the event and were asked to submit their ideas on the projects.

The founder of Kerns Bakery was Peter Kern, a German who immigrated to America in 1852 and later joined the Confederate Army. He was injured and, while being transferred to Georgia to recover, ended up by train in Knoxville. He was captured and released by Union occupiers and told not to leave the city. To make a living and feed the Union troops and local citizens Kern started a bakery. By the late 1860s his business was thriving.

Kern served as mayor of Knoxville and as an alderman and remained as company owner and civic promoter until his death in 1907. His family continued the business until three local Knoxville businessmen purchased the bakery.

The owners, Brown-Greer & Company, bought the Chapman Highway property in 1930 and their new building became a Knoxville landmark.

In 1989 the Kerns Bakery Building was purchased by the Sara Lee company and production continued there during the 2000s. After that it was vacant until purchased by the David Dewhirst and three partners for $315,000. Plans for the renovated historic structure could include restaurants, entertainment venues, retail space, offices and possibly student housing.

The purchase included 14 acres. The iconic “Sara Lee” sign remains atop the building. The purchase was aided by a $200,000 grant from the city’s Community Development Department to Dewhirst and partners last year.