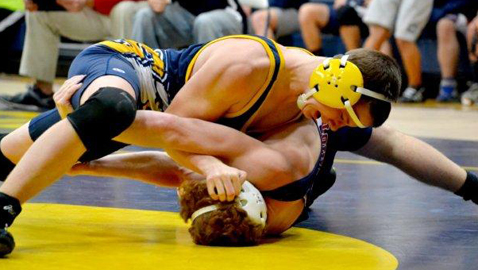 Softball standout Samantha Trentham enjoyed a victory of a different kind last week as she went to Mexico on a mission trip.

“We have been loving on and witnessing to the children down here and being ‘Jesus with skin on,’ which has kind of become our motto,” e-mailed Trentham, Seymour High’s female Student-Athlete of the Year for 2015-16.

“It makes you realize how truly blessed you are when you see how little these families have, but how they remain true to their faith and are so thankful for the little bit that they do have.”

Trentham was part of the Engage Student Ministries from Seymour Church that flew to Mexico June 24.

“We are building a wall at the local school, and we have had events for the families in several cities and churches,” added Trentham. “My favorite part of this trip is when the kids’ faces light up just when we tell them that Jesus loves them. I’m blessed to have the youth group and the leaders that I have, and I am excited to see how God uses our group in the future!”

Trentham and Grant Wallen took different paths in being named Seymour’s top student-athletes this past school year. Trentham specialized in softball after a season of volleyball as a freshman. Wallen, also a senior, was a three-sport standout in football, wrestling and tennis.

“Sam had an outstanding year for us,” said Coach Jessica Sterling, whose Lady Eagles advanced to the Class AAA state tournament. “She became our ace pitcher midway through her junior year.

“Sam was also a team-first type of player.”

Trentham finished her prep career strong too as she was selected the Pitcher of the Year and the Player of the Year in the IMAC (District 2-AAA) Conference, noted Athletic Director Gary Householder.

“In the district championship she had two home runs – the second one being the game-winner,” pointed out Coach Sterling.

Trentham finished with a .453 batting average and seven homers. In the circle, she posted a 1.22 ERA and recorded 285 strikeouts in 34 games.

“No greater pleasure as a coach to watch a player pour their heart and soul into the game and the game reward them. And that’s exactly what happened for Sam this year,” summed up Sterling. “She put in the work and was very successful.

But most importantly, Sam is a great kid and a great teammate. I look forward to what the future holds for her.”

Trentham will continue her softball career at Emory and Henry College in Emory, Va.

Wallen, for starters, was a second-team All-IMAC cornerback in football. He captured a district title in wrestling for the fourth straight year and then placed second in Region 1-AAA to qualify for the state in the 145-pound weight class. The versatile Wallen capped the year with a district singles title in tennis.

“Grant is a physically and mentally tough young man who is extremely competitive,” said Householder via e-mail. “His physical toughness helped him to excel in wrestling and football – two very demanding sports. His mental toughness and intelligence helped him to excel in tennis and to shut down opposing wide receivers in football that might be bigger and a little faster.”

Wallen has been accepted to the University of Tennessee and plans to attend Pharmacy school.

A-E’s Neal has ‘the opportunity of a lifetime’

Neal, A-E’s Student-Athlete of the Year for 2015-16, will be a offensive right tackle for the Golden Eagles in Cookeville.

During his prep career, Bradley was a three-year starter for the Roadrunners, playing offensive tackle and guard, and had over 100 pancake blocks. He earned first-team all-region honors in 2014 and 2015.

“His excellent work on the field and in the classroom has given Bradley the opportunity of a lifetime, playing college football at Tennessee Tech,” said Austin-East Head Coach Jeff Phillips.

Neal, who received an Outstanding Professionalism Marketing 1award at Austin-East, plans to major in computer engineering at TTU.

Armstrong was a four-year member of the A-E track team and was a part of the Lady Roadrunners’ state runner-up squad as a freshman in 2013.

Iyana ran on the 4×100 and 4×200 relays all four years, noted A-E girls coach Heather Sumpter-Blakemore. She also participated in the 100 and 200-meter events and was team captain this past season.

Iyana will be attending Tennessee State University, where she will major in health and sports science. She’s planning on walking on to the TSU track program her sophomore year.