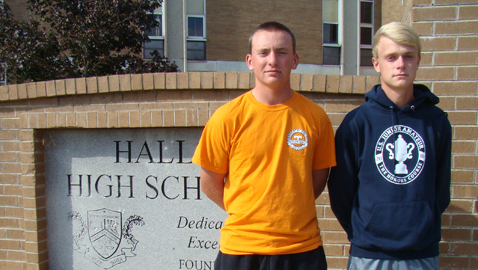 For Halls High’s talented boys golf team, it’s been a two-part plan all season long. Get past Farragut in the region and go after the state championship.

With junior Ryan Hall’s sizzling 67 leading the way, the Red Devils dominated the Region 2-AAA tournament with a 19-stroke margin of victory over its closest challenger – and it wasn’t even perennial power Farragut – Wednesday at Tennessee National in Loudon.

Only the team champion and top four individual scorers not on the winning team qualify for the TSSAA Class AAA state event, which will be held Oct. 11-12 at WillowBrook Golf Club in Manchester.

“The goal is definitely to win the state championship and I think we have the talent to do it,” said Alex Hodge, the lone senior on the Halls squad. “That’s our mindset from here on out.”

Added Hall: “We’re not going to be happy with second place. We’re wanting to win.”

Hodge carded a 73 on the par 72 course. Junior teammates Jake Hall and Anthony Basilio contributed 75 and 76, respectively. Will Collins shot 81.

Only the top four scores figure into each team’s total.

“I hit my driver and irons solid,” said the University of South Carolina commitment. “I only missed two greens all day and I was bogey free.”

Winning the region title to make the state was very satisfying for Hodge since it was his last chance.

“I’d say this is the best team I’ve been on in my four years of high school,” he said. “We have a lot of talent.

“A couple of us haven’t been to state yet, but the goal is definitely to win.”

Ryan Hall has a lot of state tourney experience as he qualified as an individual his freshman and sophomore seasons.

“I’ve played eight times there in all and four tournament rounds,” he said.

All state participants are granted a practice round on the Monday prior to the tourney.

“There are some good teams like Brentwood and Science Hill who could be at the state, if they win their region,” added Ryan.

Halls’ girls team made it a sweep at the region and also are state bound. The Lady Red Devils posted a 157 score, with individual runner-up Shelby Liford, a sophomore, carding a 74, senior Harper Cherry 83 and junior Savannah Johnson 93. In the girls division, the top two individual scores make up the team score.

FLYING HIGH: Seymour’s boys won their first district golf crown since moving up to Class AAA when they combined for a 324 score in District 2-AAA at The Country Club in Morristown last week.

Noah Phillips led the Eagles with a 79. Wesley Jones and Eli Jenkins each added an 81 and Carson Atkins contributed an 83.

Jefferson County placed second with a 330 total and Morristown West (334) was third. Spencer Cross of Sevier County, defending state champion who has committed to UT, took medalist honors with a 70.

Seymour advances to the Region 1-AAA tourney which will be played today (Oct. 3) in Jonesborough at Blackthorn Club at The Ridges.

The Seymour girls finished second in the district and were led by medalist Katelyn Witucki, who shot a 76. Cocke County captured the girls’ team title.