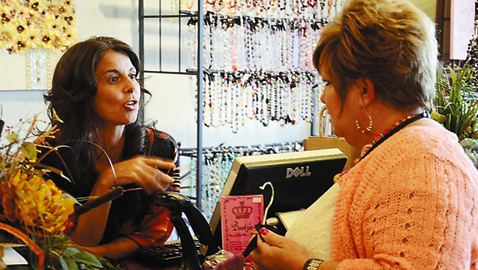 By Tasha Mahurin
Tasha@knoxfocus.com
According to Knoxville Soap, Candle & Gifts store owner Jodi Bowlin it was “Christmas in July” last week as dozens flocked to the Fountain City gift shop to participate in the first Small Business Counts cash mob presented by ORNL Federal Credit Union (FCU).
ORNL FCU announced the innovative new program last month as part of an on-going effort to give back to the community. The cash mob-style program is designed to support local merchants in the 16 counties that the credit union serves.
The program was inspired by the recent flash mob trend. A cash mob is a group of people who assemble at a local business to make purchases as a gesture of support for that business as well as the overall community- a number of which have been held locally by Knox County Mayor Tim Burchett.
ORNL Federal Credit Union (FCU) selected Knoxville Soap, Candle & Gifts, a premier woman-owned gift shop, specializing in locally handcrafted merchandise from more than 40 local artists, as its first Small Business Counts cash mob location. The store has a unique local feel and features a wide range of one-of-a-kind offerings made only in Tennessee from luxury bathing items, custom gift baskets, handmade jewelry, original art, glassware, pottery and more.
“As a small business owner, to open a store is easy but keeping it open is art,” said Jodi Bowlin, owner of Knoxville Soap, Candle & Gifts.
Bowlin, a single mother, purchased the store five years ago after working there for a couple of years. She admits running a small business is challenging and appreciates the opportunity provided by ORNL.
“This is a rare and exciting event for us to showcase everything that we have to offer to a large number of people at one time. I’m grateful for the opportunity and support of the community,” Bowlin added.
Adding to the fun, the first 30 people who participated received a $25 gift card to use on any merchandise within the store, courtesy of ORNL FCU.
Of those who came into the shop during the event, a majority of them were new customers. Bowlin said sales from the event were “equal to her busiest day during the holiday season.”
“At ORNL Federal Credit Union, we believe that small business counts. The concept of a cash mob is one that fits perfectly with our core value of community improvement,” said Chris Johnson, CEO. “There are few better ways to build a community than through the support and advocacy of small business, and I hope this program will encourage people to share in our commitment to the well-being of these merchants and communities.”
For more information about the Small Business Counts program or to nominate a local merchant for a cash mob, visitwww.SmallBusinessCounts.com. Details of each cash mob will be made available approximately one week in advance of each event.