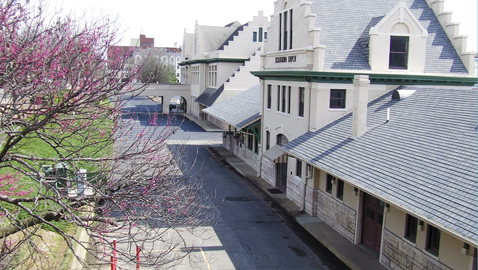 Knoxville is celebrating 225 years this year and you probably don’t realize that the city and its county have some 111 places on the National Register of Historic Sites. That includes not only historic homes and buildings but also landmarks.

You probably know our “main” sites on the national registry but there are many you may not know that are on the list. Places like the Mead Marble Quarry, the Lindberg Forest Neighborhood, or the cemetery at Lebanon in the Forks of the Rivers. Also on the list are the  Keystone Building, the Andrew Johnson Building, the Jackson Warehouse District, the Gibbs Drive Historic Neighborhood, Fire Station #5 in Mechanicsville, Happy Holler, and the Ebenezer Mill.

Oddly enough our oldest structure, the James White Fort, is not on the list. The main house built by our city’s founder was removed during the town’s development, placed on a farm, and then removed again to its present location. Being dismantled and moved twice disqualifies the fort from the national list.

The downtown railroad depots are a great example of how the historic buildings can be repurposed to house offices, businesses and venues. After languishing for years of little use the Knoxville railroad stations are having a rebirth.

Our region was settled but did not really boom until the Civil War. Following that great conflict the railroads came and transformed the area’s travel, population and culture. Unlike the river trade that preceded the trains the railroads brought and took goods from here, brought a different people, and prosperity.

The railroads also brought war to Knoxville and a struggle to control troop and supply movement. Early in the war bridge burners, a group of civilian Union supporters, destroyed railroad bridges where they could. Capturing East Tennessee meant cutting off a vital link in the rebelling states.

Railroads reached our county about ten years before the Civil War. After the war the railroads transformed Knoxville’s small population and made the city a major shipping and commercial center.

The terminal complex also had dozens of warehouses and storefronts next to the Old City and that complex is included in the recognition as National Landmarks.

Where the station sits was considered a problem by the early city for it was swampy and known as “Flag Pond.” But, being the most level spot in the area it was chosen for the terminal and the 11 rail tracks there. The railroad company was known and owned by various parties until, in 1894, financier J.P. Morgan and other investors bought and combined companies to form the Southern Railway.

In its heyday the Southern Terminal had 26 passenger trains each day. Regular service from the terminal ended in 1970.

The owners of The Foundry have acquired the Southern Depot and host parties, events, and gatherings there now. The depot is located at 318 West Depot Street in downtown Knoxville. The Blue Slip Winery also operates at the depot.

Behind the Southern Terminal is a great example of what passenger trains were once like and the cars include a postal sorting car, dining car, and two passenger cars. The station is also the home of Bullock Smith Architects and the Old Smoky Railway Museum.

Built as a warehouse to serve the Southern Depot, the long building, across the tracks from the main depot, named the Jackson Avenue Terminal now has a life of its own. Restored it now houses  All Occasion Catering which hosts large events from weddings and receptions to business and other gatherings.

Often the first landmark encountered by downtown visitors is the majestic L&N Station, where Henley Street meets Western Avenue and Summitt Hill. The Louisville and Nashville Rail Road reached Knoxville after Southern completed a line from Cincinnati to Atlanta. Although the rail line reached Knoxville in 1855, it didn’t have access to passenger service  until the owners of the L&N and Southern agreed not to compete. L&N handled transportation north and south and Southern ran east and west.

The beautiful station was started in 1904 and was designed by Richard Monfort. It opened a year later. The last passenger train to leave the station was in 1968. The railroad company continued to operate offices there until 1975.

Today the station is the home of the L&N Stem Academy, a Knox County magnet school for science, engineering and math.

At one time warehouses and tracks extended to the back of the building. The station was renovated for the World’s Fair by Alex Harkness and Station 83 Partners and it was once considered one of the most beautiful depots along the L&N system.