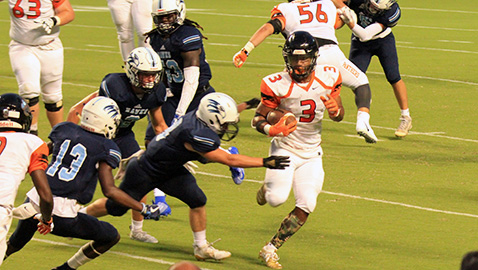 It’s more of a carryover season than a new season for the Powell High football program.

Returning players from last year haven’t forgotten what happened in 2018 and won’t. It’s a strong source of motivation for the Panthers, said Bailor Hughes, a senior leader.

“It’s a lot of motivation for us and it really helps,” said Hughes, following a preseason practice this summer.

Powell rolled to a 6-1 record last year and appeared to be headed for its first playoff berth since 2012, but was notified by the Tennessee Secondary School Athletic Association before its Week 8 game that it would have to forfeit its six wins and pay fines for using an ineligible player.

Running back Fernando Francis, who played at West his freshman season, was the ineligible player. His family had moved into the Karns zone and Francis was granted a transfer to Powell by Knox County Schools for his sophomore season, but that didn’t make him eligible per TSSAA rules.

The six wins that were changed to losses ended up costing Powell a playoff berth.

Players on the Powell team, particularly the seniors, were crushed when they heard the news from the state office.

“It was hard, particularly for the upperclassmen,” recalled Bailor. “It hurt a lot.”

“I know I was crying all day at school,” said Hughes. “It was devastating for the seniors because that was their year to make it to the playoffs after all they had been through. They had been 1-9 twice, their freshmen and sophomore years. It was hard. It was really hard.”

Still hopeful of winning enough games to make the playoffs, the hurt but inspired Panthers posted an impressive 36-21 win over West in their Week 8 game.

“The best thing that happened last year was the response of a bunch of high school kids,” said Matt Lowe, Powell head coach who is heading into his second season back at his alma mater. “Last year’s events made this team much stronger.”

“Those young men inspired not only me; they inspired an entire community. What they did that night was outstanding and will stay with most of us forever.”

Powell lost at Oak Ridge in a must-win situation in its next game and closed the regular season with a win at South-Doyle to officially end the season with a 2-8 record. The Panthers would have been 8-2 had it not been for the forfeits.

To this day, everybody still brings up the forfeits and what happened last season when Powell is mentioned in conversation, said Hughes, who plays strong safety, slot receiver and punts.

“It’s for them, definitely for sure,” said Hughes of dedicating this season to last year’s seniors.

“One of my best friends, Riley Bryant, who played the same position as me, is going to East Tennessee State, but I know that we want to win this year for his class because of what happened last year.”

Powell will face a tough test in its opener, hosting two-time defending Class 4A state champion Greeneville in the Rivalry Thursday TV Game of the Week. Kickoff is at 7.

CHAD SMITH, Powell athletic director, said last week that Francis is eligible this season even though he is still living at the same residence where he lived last year, because he has been officially enrolled as a student-athlete at Powell High for over a year.

Francis, however, is reportedly injured. He was on crutches and watched from the sidelines as his teammates played in the KOC Kick-Off Classic Friday night at Neyland Stadium.