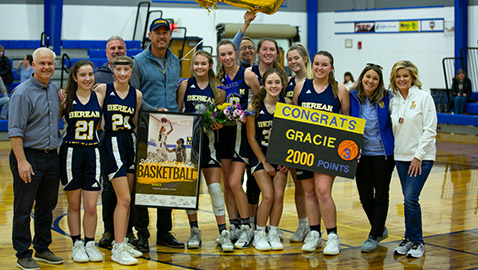 There was more suspense surrounding which team would win the game than Gracie Palmer scoring her 2,000th career point on Jan. 31.

The Berean Christian senior point guard came into the District 1-A makeup contest at Grace Christian Academy needing only six points to reach the milestone. She got Nos. 2,000 and 2,001 with a driving 4-footer in the lane with 1:32 remaining in the first period.

Caught up in the early action, Palmer admitted afterward not realizing when she was just one point away from the magic number.

“Honestly, I didn’t know,” she said. “Whenever I’m playing, I lose track of all that kind of stuff and just play. But I knew when I hit it because the crowd (reaction) made it known. It was exciting.”

That basket gave BCS a 14-11 lead over the Lady Rams and the clock was stopped briefly for the Lady Eagles to celebrate the occasion that took four seasons to achieve.

First, Gracie got a big hug from her dad / coach Eric Palmer out on the court. Then teammates and others, including her mom Liz who charts shots for the team, joined in with their congratulations and pictures were taken.

As for the rest of the evening, the Berean girls, who had won their first game with GCA by one point (52-51) on their home court on Dec. 9, knew they could be in for a battle.

And if this special night was going to be warmly remembered and cherished in years to come, it couldn’t be tarnished with a loss.

Gracie made sure it wasn’t. She stuffed the stat sheet with 34 points, 16 rebounds, five assists, four steals and three blocks and it took all that and then some to put the 62-50 win in the books.

Yep, Grace Christian made it a hard-earned victory before it was over.

Trailing 48-37 at the end of the third period, the Lady Rams outscored Berean 11-2 to pull within two points 50-48, forcing Coach Palmer to immediately leave his seat on the bench and signal for a timeout with 4:19 left on the clock.

Out of the timeout, Gracie scored on a drive down the lane, but Ella Brooks matched it with a shot inside.

Palmer then scored on a drive across the baseline and the Lady Rams missed two free throws.

Berean’s Emery Fisher hit a jumper to extend the Lady Eagles’ lead to six. And after GCA failed to answer, Palmer used a great screen by Briley Paul to fire in an 18-footer and it was 58-50.

Berean completed its 10-point run to end the game.

While Palmer had one of her better double-double games, Adeline Gibson added 14 points to the BCS total. Fisher chipped in six. Madelyn Grabowski and Paul finished with four points apiece.

“Our game plan was not in Gracie’s hands, because I knew what they (GCA) were going to do,” said Coach Palmer. “The game plan was to pound the post. So for Gracie to get 34 points just escapes me. I think I don’t realize all the time how special she is.

“I may never coach a player like that again, daughter or no daughter.”

Looking back, Gracie said midway through her junior season she didn’t think a 2,000-point career would ever happen. “I hit my 1,000th point in December of 2020, so I’ve accumulated all of these other points in a season and a half, which I didn’t think was possible.”

Now that she has topped 2,000, it’s even more special for her because it’s her last basketball season ever. “So it’s sad, but it’s exciting,” she said.

Softball is now in the future for Palmer, who signed last fall to play at LMU. She will play her final high school season for Gibbs this spring in the TSSAA’s co-op program. As good as she is in basketball, she’s one of the best players in one of the state’s best softball programs.

Gracie attributes all of her success in the two sports “to the Lord. Without Him it wouldn’t be possible,” she said. “He’s the one who has given me the ability to do all these things.”

Berean and Gracie’s big week got even bigger on Tuesday as Palmer poured in 40 points in a 70-54 win over Knoxville Christian. It was the third time in her career to score 40.

And according to Coach Palmer, his daughter was named the district’s MVP on Wednesday.