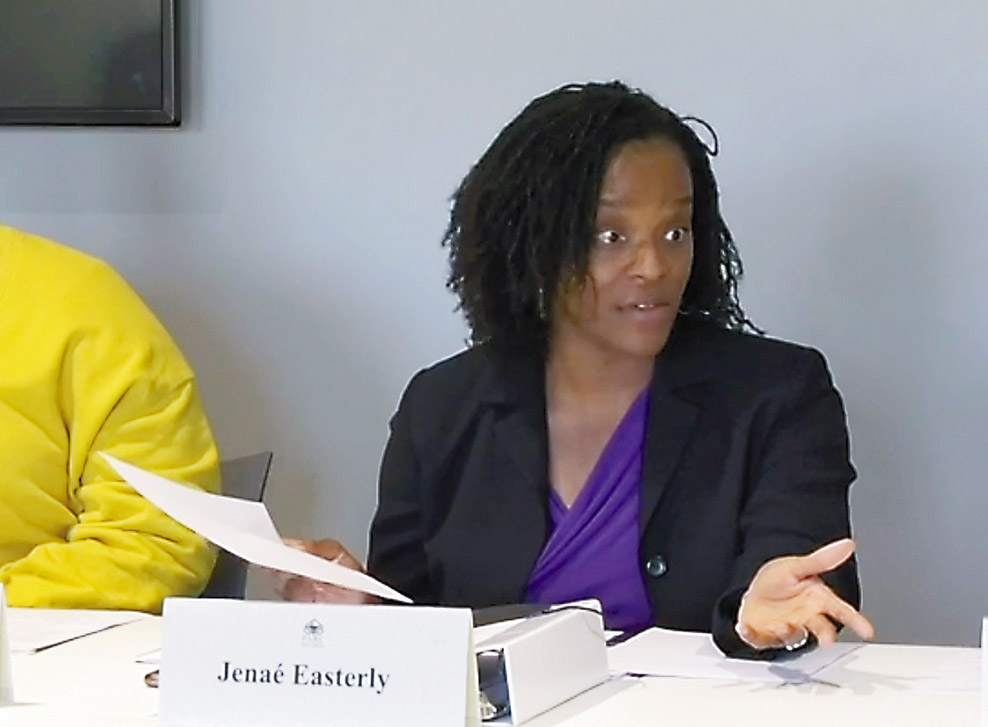 During the recent meeting of the Police Advisory and Review Committee, a question was asked about why some individuals are handcuffed before being arrested.

The question came after the members reported on cases reviewed for the first quarter of the year including one case where the officer did not turn on the body camera. That camera is supposed to be turned on anytime an officer has contact with the public.  The officer was found in violation of the city policy.

Chief Eve Thomas, meeting with the group for the last time before her retirement, answered the handcuffing question which came from Easterly, who said the incident involved a female citizen in a large crowd.

Chief Thomas said that if the reason for the arrest is made before handcuffing a subject may disagree and the situation could escalate.

“Because it is a safety issue for the officer and the public, the suspect is handcuffed first and then an explanation is provided as happened in this case,” Thomas replied.

“In this situation, they could have given her a small explanation,” Easterly said, adding, “Remove her from the crowd because it can cause some confusion, especially for someone who has never interacted with a police officer.”

Starks read the police department’s statement that officers are not required to give a reason before handcuffing someone. “Can KPD actually be trained in that area?” she asked. “I’ve seen incidents where people are being detained and not told why.”

Chief Thomas replied that officers are not trained to give reasons before handcuffing and are not required to do so by policy.

“Every situation is different, we do a lot of scenario training. We tried to mix it up and there are times when it’s good to do that, but it’s not required,” Chief Thomas said.

Other questions involved a new officer who apparently failed to turn in the hours he worked overtime in a court case while in uniform. Chief Thomas said that new officers are taught in the academy how to fill out the forms. She said the investigation into the incident found it was an innocent mistake.

Croom ask about the identification of plainclothes officers.

“At what point do they have to present some type of credentials?” he asked.

Thomas said that off-duty undercover officers may respond to a dangerous situation without a credential but otherwise officers will have ID on their clothes.

Easterly asked about the expected battery life of a body camera and was told by Sgt. Rachel Britt that it depends on the situation. She said that if the battery is at 44% there are four to five hours of power left on the camera. She said that officers have in-car chargers for a slow charge, have chargers they can take home and docking stations at each of the precincts. She added that supervisors carry extra body cameras if an officer’s camera gets low on power or is damaged.

Easterly also asked what violation would result in an officer being suspended for more than two days. Thomas said it depends on the violation. She said she interviews officers prior to suspension hearings and the punishment could range from suspension to termination.

PARC meets quarterly to review cases and complaints and makes recommendations back to the police department.

Some cases are handled by the committee or the department’s internal affairs department.