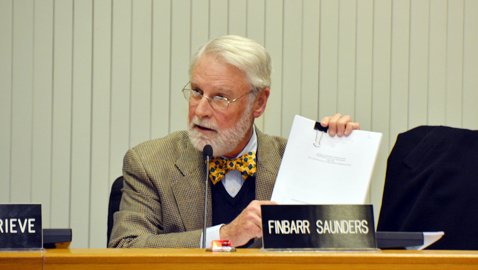 The demolition of the Pryor Brown parking garage, built in the 1920s, to make way for a block-long street level parking lot was rejected by City Council last week.

Royal Properties was appealing a Metropolitan Planning Commission rejection. A local petition to save the multi-story garage and objections by Knox Heritage may save the structure. The old parking facility, located on the corner of West Church and Market, may be one of the oldest such buildings in the nation.

Arthur Seymour, Jr., and representatives of the owners, Royal Properties, told the council the building is “beyond repair,” citing the age of the building, the concrete deterioration and a hole in the roof.

Kim Trent, executive director of Knox Heritage, said the garage is eligible for listing on the National Register of Historic Sites and developer David Dewhirst said that the garage could be restored and urged the council to reject the appeal.

Councilman Marshall Stair called for no motion after saying the garage’s condition was simply about the “neglect” of keeping up repairs.

Councilman Dan Brown said he had visited the garage and wants to see it preserved.

The Pryor Brown parking garage was bought by the federal government years ago with the idea of demolishing it and building a federal courthouse. When another site became available it was sold to the present owners in 1995.

Stair said the multi-story structure fits well within the collection of historic buildings downtown, and offers more parking than a parking lot.

“This building defines that street. There’s something unique about it,” he said, adding that the demolition of the building and a block-long lot would be like “missing teeth in a beautiful smile.”

Councilman Duane Grieve asked how much it would cost to restore the garage and called the condition of the building and the request to remove it “demolition by neglect.”

With no motion to approve or disapprove, the idea of demolition failed.

The council also voted to give the mayor permission to establish rules and regulations for the operation of mobile food trucks in the city. The pilot program would be tweaked as it runs but could give the vendors expanded sites to operate downtown.

The council also postponed action amending the employee pension system. Kathy Aslinger told them the changes are required to meet Internal Revenue requirements and would include changes in the actuary table to calculate retirement benefits for employees who add a beneficiary.

Stair said the change in the calculation would increase the amount paid to retired employees a possible $5 to $7 million over the years. He asked if the change in calculation was required to meet the IRS regulations and Aslinger said, no, but would keep up with the actual cost and “correct the math.”

Stair said he would not support that and, along with Councilman George Wallace, said the number of pages presented to the council in the proposal would not be reviewed for a decision at or before the meeting.

Councilman Finbarr Saunders, who initially introduced the motion to approve on first reading, pulled the motion off the table and Wallace moved to postpone until the members could review it.

The city council also postponed, until their Dec. 12 meeting, any discussion dealing with signs, billboards and advertising structures in the regarding height regulations.