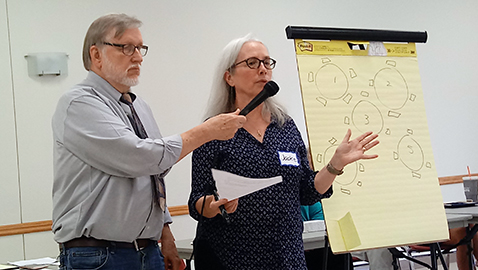 Office of Neighborhoods Director Debbie Sharp called the service “Knoxville’s best kept secret.” She was speaking to a group of Parkridge neighborhood residents last week at the O’Connor Senior Center about the Community Mediation Center.

Sharp said that Mayor Madeline Rogero offered the CMC to mediate between the homeowners in the East Knoxville neighborhood who have different opinions on the future of their area. One side wants the current historic overlay extended to cover most of their area; one side doesn’t want the restrictions that such an overlay brings. The city is offering a possible compromise, establishing an NC-1 zoning there.

A Neighborhood Conservation Overlay, or NC-1, recognizes some buildings and houses as of “primary significance” and governs the demolition of structures and construction of new  additions to properties. It doesn’t govern improvements or changes to non-historic homes or buildings.

Jackie Kittrell, executive director of CMC, introduced her staff and a number of volunteer mediators and said, “We’re not here to solve a dispute in the neighborhood.”

She went on to say the mediators will get the neighbors in the same room to talk among themselves.

Mediator John Seltzer and Kittrell presented a plan for a structured process. Seltzer said that it is difficult to deal with a large group so the two mediators suggested a future meeting where neighbors would be divided at different tables, with those with one position represented at each table. Each table would be asked what they like about Parkridge, what they don’t like, etc. The answers would be reviewed and common interests found.

“There are no winners or losers,” Kittrell said, “People can dig under their positions.” She said that the neighborhood people can work out a solution.

“The public forums did not reach a consensus,” Seltzer said. He said at the next meeting the mediators, or facilitators, might ask what the neighbors value the most about their area.

“We did not get to the point of planning the mediation session. There may need to be more meetings before we get to that point,” Sharp told The Focus after the meeting.

Apparently more “Mediation Orientation” meetings will need to be held before the actual process begins.