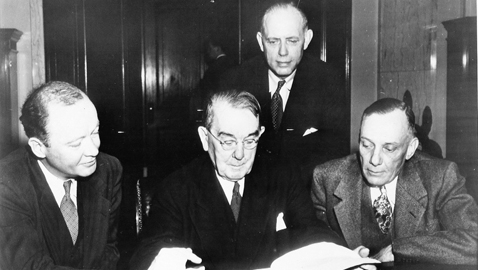 Tennessee’s senior United States senator, Kenneth D. McKellar, had finally abandoned his opposition to the construction of the Douglas Dam.  For those who thought it signified some kind of surrender in his battle of wills with Tennessee Valley Authority Director David E. Lilienthal, they were very much mistaken.

Kenneth Douglas McKellar was perhaps the most accomplished feudist in the nation’s Capitol.  McKellar gave no quarter in his feuds, nor did he seek any.

Senator McKellar began what some referred to as his “annual spring offensive”, introducing an amendment, which would require the Tennessee Valley Authority to pay its receipts into the federal treasury.  McKellar also introduced an amendment that would require Senate confirmation of any federal employee earning more than $4,000 annually.  McKellar also introduced a bill, which would have removed TVA’s condemnation cases from being heard by commissions appointed by the courts to being heard by local citizen panels.  Yet another McKellar bill called for Congress to approve the Tennessee Valley Authority’s operating expenses.

Senator George Norris felt constrained to publicly defend Lilienthal on the Senate floor in the spring of 1942.  According to Lilienthal’s biographer, Steven Neuse, the Nebraska senator told his colleagues he would not place any other public official “above Mr. Lilienthal for honesty and integrity.”

Senator Norris decried McKellar’s onslaught against the TVA Director as more “in the nature of a stump speech.”

David Lilienthal made a conscious effort to travel across Tennessee and the junior senator from the Volunteer State, Tom Stewart, felt quite certain the TVA Director had lent aid and comfort to his opponent in the Democratic primary, if not outright support.  Senator Stewart thoroughly disliked Lilienthal almost as much as McKellar.

Lilienthal spoke before the Jackson Rotary Club and dismissed Senator McKellar’s amendments and legislation, which he equated as being against the Tennessee Valley Authority, as “pop pistol politics.”

By 1944, the McKellar – Lilienthal feud had escalated, and Steven Neuse recorded the TVA Director describing the senator as “more violent and virulent than ever.”

Senator McKellar opened a full frontal assault on David Lilienthal as Roosevelt administrators lined up against him.  Senator McKellar snorted Lillienthal’s contention his amendments would cripple the operation of the Tennessee Valley Authority as little more than “propaganda.”

“The statements made by Lilienthal and others and these amendments would cripple or destroy the TVA are wholly without foundation in fact,” McKellar barked.

“Lilienthal today is lobbying by sending out falsehoods all over the state, using the government’s money for the purpose of circulating this propaganda trying to save himself from an ignoble end which he knows is facing him,” the senator charged.

Senator McKellar dismissed the rumors he was unhappy due to not receiving political patronage.

“Surely no one in Tennessee believes that at my age I am trying to obtain patronage,” McKellar scoffed.  “Lilienthal’s statement to that effect is a willful, deliberate and malicious falsehood.”

McKellar would publicly demand Lilienthal answer the question whether or not the senator had insisted upon making political appointments inside the Tennessee Valley Authority.  The Director’s answer would be ignored by McKellar’s opponents.

Both McKellar and Stewart charged Lilienthal with interfering in Tennessee politics.  Lilienthal wrote a letter to Alabama Senator John H. Bankhead, II (who had been McKellar’s roommate in college) denying the allegations.  Senator Stewart announced he would not support McKellar’s amendment altering the Tennessee Valley Authority’s financial setup.

Senator Alben Barkley, the Senate Majority Leader and a close personal friend of McKellar, told reporters he felt the issue between the Tennessean and Lilienthal was a personal one.  “I don’t think TVA ought to be punished in order to punish Lilienthal,” Barkley said.

By May of 1944, Senator McKellar told his colleagues he felt David E. Lilienthal should be removed as Chairman of the Tennessee Valley Authority.  Considering McKellar’s dislike of Lilienthal, few, if any, of his fellow senators expressed surprise.  Should Lilienthal not be removed, McKellar believed the TVA Director should be impeached “for violating the anti-trust laws of the United States.”

Senator McKellar pointed out Lilienthal had approved agreements between the Tennessee Valley Authority and private power companies creating “a division of territory in which one sells and the other agrees not to sell.”

Lilienthal baited McKellar, saying, “Senator, you are an old man, and probably haven’t much time to live.  You are doing a fellow human being an injustice in your position toward me.  You don’t want to carry that on your soul when it comes your time to go.”

Lilienthal’s gambit worked, disconcerting McKellar who screamed, “God damn, God damn, I have had enough of this.  I am God damn tired of this, and I won’t stand for it any longer.”

Every appearance before Congress became an excruciating experience for Lilienthal.  While testifying before the Senate Appropriations Committee in 1946, Lilienthal admitted that he and the Tennessee senator had differed on matters of policy, but McKellar’s “opposition” to TVA was “a matter of construction.”

Senator McKellar demanded from the Chairman of the TVA Board of Directors just what construction he was referring to;  McKellar asked Lilienthal to “name any appropriation that I ever refused to give the TVA for any dams.”

Lilienthal was forced to confess that only in one instance, that of Douglas Dam, had McKellar held up any appropriation and in the end that, too, was funded.  Pressed, Lilienthal said the policy disagreements between himself and Senator McKellar was confined to the “McKellar amendments,” which would force the Tennessee Valley Authority to pay its receipts into the federal treasury.  Lilienthal said he could think of no other policy disagreement.

David Lilienthal was officially appearing before the Appropriations Committee to request $10,666,000 more for TVA than had been approved by the House of Representatives.  Lilienthal explained the extra money was for construction of the Wautauga Dam, as well as the planning of the South Holston Dam.  Senator McKellar immediately introduced an amendment to the appropriation for $17,666,000 so that construction could begin on both dams at once.

McKellar used Lilienthal’s appearance before the Senate Appropriations Committee to ask the TVA chairman if he had ever recommended anyone for a position inside the Tennessee Valley Authority.  Lilienthal replied the senator had not.

Most everyone in Washington had been exhausted by K. D. McKellar’s pursuit of David Lilienthal.  Franklin D. Roosevelt’s death in April of 1945 likely kept Lilienthal in public life for years to come.  FDR had summoned Ed Crump, leader of the Shelby County machine, to the White House just shortly before he died.  The topic of conversation was Kenneth McKellar.  Roosevelt’s legendary charm failed to beguile the Memphis Boss.  FDR pressed Crump to urge McKellar to retire in 1946.  The Boss replied McKellar would run again.  Roosevelt quickly opined McKellar would lose and Crump calmly corrected the president and told him the senator would be reelected, as he was.

Roosevelt, disappointed he had made no headway with Crump, decided not to reappoint David E. Lilienthal to the Board of Directors of the Tennessee Valley Authority.  FDR knew McKellar’s influence in the Senate and was certain the Tennessean would declare Lilienthal “personally and politically obnoxious”, making it unlikely that he could be reappointed.

Harry Truman, the feisty man from Missouri, determined to reappoint Lilienthal despite the fury of McKellar.  The president told his aide Jonathan Daniels of his intentions and chortled he realized McKellar would have “a shit hemorrhage.”

Truman, a former member of the Senate, had been conciliatory with Congress and was still basking in the “honeymoon” phase of his administration when he renominated David Lilienthal to a new nine-year term as Chairman of the Tennessee Valley Authority.  Truman’s timing was impeccable and it defused much of the opposition McKellar could muster.  Realizing he could not defeat Lilienthal on the Senate floor, the senator went ahead and informed his colleagues he found the nomination “personally obnoxious.”

Both Senators McKellar and Stewart had voted against Lilienthal’s confirmation, a largely symbolic gesture at that point.  Senator Stewart said Lilienthal’s reappointment was “a sour day for the whole South.”

McKellar and Stewart had met with President Truman and later announced they would not actively oppose Lilienthal’s nomination.

Senator McKellar had an even more unpleasant surprise in store just a year later.

During August of that year, Senator McKellar took a leisurely trip back home to Tennessee after Congress had adjourned.  He stopped in Bristol on his way to Memphis and was in excellent spirits.  McKellar met with local reporters who expressed interest in the South Holston and Wautauga Dams.  President Truman had recommended both dams be delayed, but Senator McKellar was “confident” the work would proceed.  McKellar noted the bill he had passed with reference to the two dams called for the work to resume on both projects immediately.

“And even Mr. Lilienthal is not above the law,” McKellar had said with a wink of the eye.

McKellar had gone on to Knoxville where he was being feted by the American Legion state convention.  One big reason for McKellar’s exceptional good humor was that he had just been renominated in the Democratic primary for a sixth term.  McKellar had beaten Edward Ward “Ned” Carmack, who had quite nearly defeated Tennessee’s junior senator, Tom Stewart, four years previously.

“And you know,” McKellar told a reporter, “I didn’t make a single campaign speech or radio address until after the primary was over.  I didn’t even mention the name of a single one of my opponents.”

It was true.  McKellar, who had been ill much of the year, had not even come home to campaign and had dispatched a serious opponent with ease.

President Truman had indicated he was considering Lilienthal to head the Atomic Energy Commission the first week of October and Senator McKellar immediately snapped, “I will do everything that I can to see that he is rejected.”

“I would like mighty well to see him out of TVA but not to go on the atomic commission,” McKellar added.  “I would oppose any man in the world who isn’t willing to pay the profits he makes for the government into the government’s treasury.”

As McKellar prepared to oppose the Lilienthal nomination to the Atomic Energy Commission, as well as that of Gordon Clapp to become Chairman of the Tennessee Valley Authority Board of Directions, the November elections brought a Republican majority to both houses of Congress.  McKellar became acquainted with Knoxville attorney L. B. Bolt, who had been dismissed from TVA and told the senator the agency was under the influence of Communists.  Aaron D. Purcell has written extensively on the Tennessee Valley Authority and his book White Collar Radicals: TVA’s Knoxville Fifteen, the New Deal, and the McCarthy Era is an interesting read.  Clearly some TVA employees had been Communist party members or flirted with Communism and Senator McKellar almost single handedly changed the focus of the hearings inside the Senate.

Unfortunately for Senator McKellar, some of the witnesses he brought before the committees were not highly creditable.  The testimony in some respects was damaging enough to cause the Public Works Committee to report Gordon Clapp’s nomination unfavorably.  McKellar’s obsession with Lilienthal was such that one of his secretaries, Dorothy McDaniel Walsh, had responded to a letter from a friend recommending a young man for an appointment to one of the military academies that she would bring his missive to the senator’s personal attention.   Mrs. Walsh cautioned the friend that she would do so once the hearings were out of the way, as McKellar was so focused on them that he had little time for anything else.

Eventually, both the David Lilienthal and Gordon Clapp nominations were confirmed by the Senate.  By 1949, McKellar had announced he would not seek another term in the United States Senate.  Thousands of the senator’s friends in Tennessee urged him to change his mind, which he did.  Early in 1951, Senator McKellar announced “God willing”, he would be a candidate again in 1952.