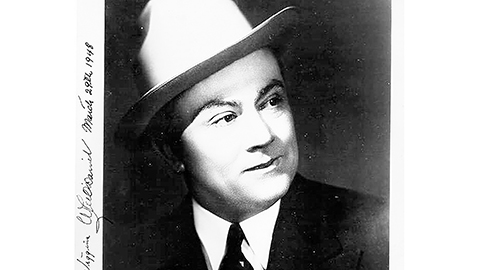 Every state in the nation has seen the rise of a particular politician who comes from nowhere to capture the imagination and votes of citizens; some are demagogues, others are reformers and many are just plain showmen. Wilbert Lee O’Daniel of Texas may have been a little bit of all three. The only man ever to deal Lyndon Johnson an electoral defeat, W. Lee O’Daniel was a salesman, marketing genius, songwriter, businessman, and for a time, a very successful politician.

Lee O’Daniel was born March 11, 1890 in Ohio, later moving to Kanas where he lived on a working cattle ranch. Eventually, O’Daniel made his way to Forth Worth, Texas where he worked for the Burrus Mills, a company that sold flour. O’Daniel showed his flair for showmanship when he was given responsibility for promoting his company’s flour on the fledging medium of radio. W. Lee O’Daniel shrewdly hired musicians to form a band called the “Light Crust Dough Boys” to perform and sing to entertain audiences while selling his product. Several musicians rose to prominence after having been originally hired by W. Lee O’Daniel, including Bob Wills. After the Light Crust Dough Boys disbanded, O’Daniel had gone into business for himself, creating his own label of flour, O’Daniel’s Hillbilly Flour. O’Daniel also quickly put together another troupe of performers, which featured his son, Pat. Pat O’Daniel and His Hillbilly Boys were soon heard on the airwaves regularly while Lee O’Daniel promoted his flour.

Lee O’Daniel soon won the nickname of “Pappy” due to a frequently heard phrase on the O’Daniel radio show; during the show, someone would cry, “Pass the biscuits, Pappy!’ and it was not long before Lee was known as “Pappy” O’Daniel.

Pappy O’Daniel proved to be a skillful promoter of his product, mixing music and a steady flow of homilies to entertain his audiences, which were becoming enormous. Pappy was on the air at 12:30 p.m. every day and by the mid-1930s, O’Daniel was heard all across Texas. Pappy had a voice made for radio and his talented children joined the family business, which was as much entertainment as it was selling flour. The widespread exposure of Pappy O’Daniel made him famous throughout Texas and it was not long before Pappy’s mild lectures on motherhood, the Bible and praise for his adopted state caused listeners to suggest he seek the governorship. Pappy’s ears perked up and he was soon lured by the siren call of politics.

O’Daniel announced his candidacy for governor in 1938 and his opponents considered him little more than a silly phenomena produced by radio. Pappy O’Daniel had never before been elected to anything and had no background to suggest he could be a successful chief executive. That meant little to the voters and Pappy traveled throughout Texas, speaking to gigantic crowds about his platform, which largely consisted of the Ten Commandments and the Golden Rule. Pappy poured his vocal honey onto the proverbial political biscuit, adeptly adding a dollop of populist rhetoric to his speeches, favoring a monthly pension for the elderly. At the same time Pappy O’Daniel was promising pensions, he pledged to stop a sales tax, which would have of course brought in much-needed revenue to the state’s coffers. Pappy’s platform also included a promise to abolish capital punishment, a testament to O’Daniel’s popularity with Texans, especially in the more rural parts of the state, at the time. Another of Pappy’s unusual promises was to eliminate the poll tax, a tax O’Daniel himself hadn’t bothered to pay. Of course Pappy didn’t miss any opportunity while campaigning to mention the virtues of his own Hillbilly flour.

To the surprise of the political professionals, Pappy O’Daniel won fifty-one percent of the vote in the Democratic primary, crushing his twelve opponents. In Texas, Pappy was the new governor in all but name as the Republicans represented no challenge in what was then a one party state. Despite his promise to the contrary, once in office Pappy proposed his own version of the sales tax, which the legislature promptly defeated. O’Daniel found he could do little to enact the meager platform he had pledged to put into place once elected governor, but the legislature’s intransience did little to affect Governor O’Daniel’s personal popularity. He was reelected in 1940 easily and many legislators who had been scornful of the new governor and his administration found themselves defeated in the primaries. Had Pappy O’Daniel’s attention not been diverted by events, he might have managed to pass some of his schemes.

What diverted Pappy’s attention was the United States Senate. On April 9, 1941, U. S. Senator Morris Sheppard died suddenly of a brain hemorrhage and under Texas State law, a special election would have to be held to pick the late Senator’s successor. It soon became readily apparent Pappy O’Daniel himself coveted Sheppard’s Senate seat. As governor, it was up to O’Daniel to appoint a successor in the interim and ever the showman, Pappy produced one hell of an appointee. O’Daniel, all smiles, announced the appointment of Andrew Jackson Houston to fill the vacancy. Not only was Houston named for one of the most famous Democrats of all time, but was also the last living son of Sam Houston, a true legend in Texas. Many professional politicians were astonished by O’Daniel’s appointment of Houston. While certainly the son of Sam Houston, A. J. Houston had been a Republican, a Prohibitionist, and a Democrat. Houston was also eighty-six years old at the time of his appointment, making it almost certain he would not run in the special election to succeed Morris Sheppard. In fact, Houston’s health was so frail his daughters begged him not to leave Texas to go to Washington, D. C. Senator Houston ignored the advice of his daughters and managed to attend exactly one committee meeting before dying five days after his eight-seventh birthday on June 26, 1941.

Pappy O’Daniel entered the Senate race and faced Attorney General Gerald Mann and a young Congressman from Austin, Lyndon Johnson. Johnson had first been elected to Congress in 1937 and had been regularly reelected every two years. Johnson was considered to be one of the more liberal members of the Texas delegation and a supporter of the New Deal and Franklin D. Roosevelt. The President was not universally popular in Texas, especially with the elite businessmen and the new oil millionaires. Former Vice President John Nance Garner was himself a Texan and resident of Uvalde, Texas and had been adamantly opposed to a third term for FDR in 1940. Speaker Sam Rayburn and Congressman Lyndon Johnson were considered Roosevelt’s most reliable allies in Texas and FDR himself did what he could to promote the LBJ candidacy. Billboards sprang up all across Texas in full color, featuring a beaming Roosevelt shaking hands with Lyndon Johnson.

Johnson’s Senate campaign was lavishly financed by business interests close to the young Congressman; Pappy’s own campaign was not wanting for cash, as he had the support of many who thought he could do less damage in Washington than he could at the State Capitol. Lyndon Johnson appeared to have won the Senate contest as the returns started trickling in, but the young Congressman was soon astonished to see Governor O’Daniel not only creep up on his vote totals, but finally surpass it. Pappy O’Daniel edged out Lyndon Johnson by a little over thirteen hundred votes; as it was a special election, there was no provision for a run-off election. Pappy had beaten two sitting Congressmen, the State Attorney General and a host of others to go to the United States Senate.

Lee O’Daniel won the regular election to the Senate in 1942 without any significant opposition. It was to be the apex of his career and the start of a slow decline. O’Daniel made little impression inside the Senate, largely overshadowed by his senior colleague Tom Connally. O’Daniel’s positions on issues became not only more conservative, but also more extreme. Senator O’Daniel opposed Franklin Roosevelt’s bid for a fourth term in 1944 and was thought to be by many as a Republican in all but name. O’Daniel campaigned for a Republican Congressional candidate in a special election, adding to the concerns of suspicious Democrats. By the time O’Daniel’s term expired in 1948, polls showed his support in Texas had dwindled to the point where it seemed certain he could not be reelected. Rather than risk defeat, Senator O’Daniel, who was becoming more and more obsessed with the threat of Communism in America, announced he would not seek reelection and added there was not likely much he could do to save the United States from internal Communism in any event.

O’Daniel returned to his business interests, which included a prosperous insurance company. Evidently Pappy’s desire to hold elective office had not ended with his voluntary retirement from the Senate, as he declared himself a candidate for governor again in 1956. Pappy campaigned against the Brown vs. Board of Education decision by the Supreme Court, which he considered to be nothing less than a Communist coup against the United States. Pappy naturally campaigned against the threat of Communism and ran third in the primary, although he managed to carry a total of sixty-six counties and accumulated almost 350,000 votes. O’Daniel tried again in the 1958 gubernatorial primary, but Pappy’s day had come and gone. The once popular O’Daniel had the indignity of running behind the first serious Hispanic-American candidate in the governor’s race and won only eighteen percent of the vote.

Pappy O’Daniel had gone from being one of the champion vote getters in Texas history to an eccentric. At his zenith, O’Daniel had won four statewide elections in as many years. As is oftentimes the case with those men of the people who manage to turn politics on its head, Pappy O’Daniel burned out rather quickly. He retired to his ranch and resumed his insurance business and had made significant investments in real estate.

Lee O’Daniel died May 12, 1969 at age seventy-nine. Pappy is enjoying something of a revival currently, in the form of the music he promoted on his radio show. Several CDs have been released in recent years celebrating the western swing sound Pappy O’Daniel helped to make famous. W. Lee O’Daniel’s most lasting legacy was not what he accomplished for the people of Texas, but rather his music.