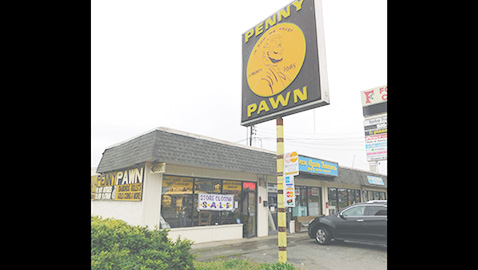 A well-recognized Fountain City business is closing soon. The Penny Pawn Shop at 4821 North Broadway has announced it will be open a week or two to sell out its merchandise at greatly reduced prices.

Terry Merianos, owner of Penny Pawn and of Martha Lee’s Jewelry, said Tuesday that her husband passed away two years ago and the iconic Pawn Shop building is closing.

“We are in the process (of closing) and have a couple of weeks to get out of the building. My aunt, Mildred Mason, started the business in 1985 when there were only three pawn shops in all of Knoxville,” Mrs. Merianos said Tuesday.

Pantelis Merianos, her late husband,  was a Greek immigrant and became well known and liked in his community.

The Penny Pawn in recent years stopped taking pawns and, according to Terry, began buying items so there’s no customers out there needing to buy back their pawned items

“Martha Lee’s will remain open,” she said of her jewelry store on 5103 Clinton Highway.

“Penny Pawn has been a family-owned business. Everything has to go. I hate going-out-of-business sales. We’d like to see our same customers come in and look at what we have. We have jewelry, Barbies, beer steins, collectibles, and some electronics,” she said.

Displays, fixtures and safes will also be for sale.

“Penny Pawn is on North Broadway in front of Big Lots,” she said, adding, “the building is under contract so we have to close. We may be open until April 4th.”

Asked what she may do with leftover merchandise she said she’ll probably take it Fountain City Auction.

North Broadway in Fountain City will look odd when the decades-old Penny Pawn sign comes down.