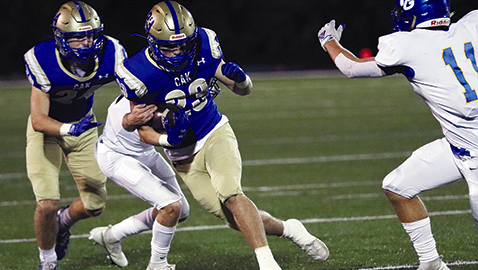 Goodpasture’s offense too much for CAK

After its thrashing of Boyd-Buchanan in the first round of the TSSAA state playoffs on Nov. 6, Christian Academy of Knoxville not only had a perfect 11-0 record, it had yielded barely 11 points per game on defense.

Its offense, meanwhile, had equally held its own, averaging more than 37 points per contest.

Against Goodpasture Christian School (from Nashville) in the second round Friday night at home, the Warriors’ offense again delivered.

Its defense did not.

Goodpasture jumped to a quick 14-0 lead, held off numerous CAK rallies, and won 61-43 to advance to the state semis of Division II, Class AA. The Warriors ended their season at 11-1.

GCS went up 14-0, first on a touchdown pass, then a two-yard run after a pick of quarterback Ryan Degges that went back to the Warriors’ one. CAK was then forced to play catch-up the rest of the game. But GCS’s offense was simply too good.

CAK cut it to 14-7 on a 38-yard scoring pass from Degges to Grant Sterchi late in the first period. But the Cougars answered right back on a 58-yard strike from Cooper Pennington to David Harris to make it 21-7.

After another interception of Degges – this time by Pennington – GCS made it 28-7 on a 10-yard run by Brendan Jones. Both Cougars’ scoring passes were to wide-open receivers.

“Miscommunication in the secondary,” said Mozingo of the coverage breakdown. “So much of the secondary is understanding and communicating with the guys around you. We just had some breakdowns there. Everybody in the stadium knows when a guy’s running wide open down the middle of the field. I’m frustrated for the kids.

CAK cut it to 28-10 on a field goal, but another long pass completion by Pennington set up his own 10-yard touchdown run and a 35-10 lead. A late-half touchdown run by Warriors’ running back JD Dunn made it 35-17 at the half.

For the game, Dunn was a beast, carrying the ball 34 times for 304 yards and five touchdowns. Degges was 20 of 30 for 226 yards and a score, but was picked three times.

“He’s so steady,” said Mozingo of Dunn. “He might get six or he might get 60. It’s been fun to watch him play this year.”

A turning point in the game came on the first possession of the second half. Behind the running of Dunn, CAK drove from its own 20 the Cougar 14, where it had a fourth down. A touchdown would have cut the lead to 11, and given the Warriors huge momentum.

But Degges’s pass fell incomplete, and the ball went over to GCS. Jones then covered the entire 86 yards on five carries to give the Cougars a 41-17 lead.

“Our defense struggled tonight,” said Mozingo. “You’ve seen us play all season. To run the football it’s on the line of scrimmage. If you win there you’re gonna win the game. We kinda got pushed around a little bit here and there.”

The Warriors would continue to fight, scoring twice more on runs by Dunn before the end of the third. But Goodpasture would answer every time. Pennington’s five-yard keeper with 5:26 to play made it 55-30. CAK’s hole was then too deep. Dunn scored twice more late in the game.

“They played hard, they battled back,” Mozingo said. “They never quit, it’s CAK football, we grind. It was good to see resilience and grit, even to the very end. I’m gonna give all the credit to Goodpasture. They did what they had to do and they played their game plan. They had us on our heels a few times.

Mozingo, who finished his fifth year, is high on the Warriors’ future. “My first year we won two games,” he said. “It’s been fun to build this thing up. We got a good class coming up. We got a jam-packed junior group. Our sophomore class is really strong too. I think (tonight) will motivate them going into the offseason.”