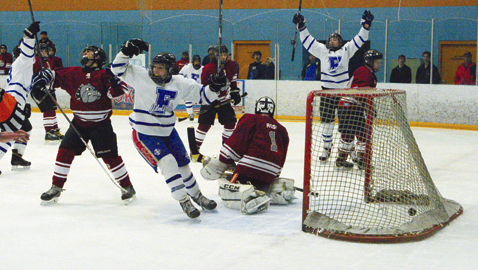 It took a late goal and perhaps an extra game but the Farragut High School hockey club was able to win its third consecutive Moore Cup Championship Thursday night.

“We did what we set out to do and we got 41 shots,” Admirals coach Jeff Lindsay said after his squad notched a 2-1 victory over the Bearden/Karns Ice Dawgs before a spirited crowd at the Icearium. “Bearden played a great game and it was a clean game.

The top-seeded Admirals forced a decisive game in the Moore Cup final when they beat the second-seeded Ice Dawgs 4-1 Tuesday night. Bearden/Karns handed Farragut its third loss of the season in the semifinals. It was Farragut’s first loss to an area team and it forced the Admirals to emerge from the loser’s bracket.

This game wasn’t easy for Farragut, which claimed the title while down two men thanks to a pair of slashing penalties with 16. 2 seconds left.

Those penalties came just 1 minute, 16 seconds after Tyler Peter scored the eventual game-winner with the Admirals on the power play. The Admirals may have won the game and skated with the Moore Cup for the third straight year, but Ice Dawgs junior goaltender Braden Ross sparkled on this night as he stopped 39 shots, including 21 in the first period.

“He’s a great goaltender and he always gives us problems,” Peter said after scoring the game-winner with help from league scoring champion Steven Popovich and sophomore playmaker Kenny Richter.

Both the Ice Dawgs and Admirals advance to the Blue Division State Tournament March 12-13 at the Icearium and Bearden/Karns coach Aaron Barnes is eagerly awaiting the upcoming state championships in Knoxville.

“We still get a chance to go to the state and that has to be our focus now,” Barnes said after watching his team suffer a heartbreaking loss. “These kids didn’t quit and that’s the thing that I love most about this team. They never quit.

The Admirals got on the board first on Thursday night when league scoring champion Steven Popovich tallied just 55 seconds into the contest. He scored an unassisted goal when he chipped the puck past Ross, who earned accolades from Lindsay.

“Braden played a great game again,” said Lindsay who guided the Admirals to the Moore Cup last season after a disappointing regular season that saw Farragut (the defending 2014 State Champion) finish fourth only to win the postseason tournament and make a deep run at state in suburban Memphis in 2015.

Ross and Farragut freshman netminder James Brinkley then stole the show. Brinkley made 13 saves but the Admirals surrendered the equalizer when Jake Foard knotted the game 1-1 with 3:27 remaining in the third period. The power-play goal was assisted by Keaton Gaddis.

For his part, Ross is looking forward to his first-ever State Tournament appearance.

“We haven’t been to state since I’ve been in high school and it should be a good and fun experience for us,” Ross said.