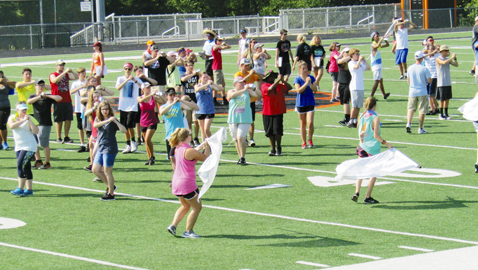 When Powell High’s football team had its first official day of practice in pads on July 17, the school’s marching band began its two weeks of camp.

Like the football team, the Powell band’s season debut will be at Halls on Aug. 18.

“We actually start practicing the first of June,” said PHS band director Ricky Shaw during a break at camp on July 19. “Our percussion and color guard get together once a week that month and then we have what we call ‘Ricky Camp,’ which is in mid-July and we teach the new marchers how to march.”

That’s followed by two weeks of “pretty intensive camp when we learn the majority of our show,” added Shaw, who has been teaching in Powell since 2003 and became the high school band director in 2009.

Despite the hot summer weather, the Powell band practiced from 8:30 in the morning until 4:30 in the afternoon the first week of camp, with several breaks of course throughout the day.

Three-a-day practices were on the camp schedule last week for Powell band members.

The long days of practice are expected to give Powell fans something special to look forward to again this year.

“We always do entertaining shows,” said Shaw. “That’s our No. 1 priority – to make sure the kids enjoy what they’re doing and also make sure that the crowd enjoys the show. We’re kind of known for that around the county and have been so for some time.”      Powell’s show this year will be called “Galactic Fever,” said Shaw. “It’s a 40th anniversary tribute to the music of Star Wars and Saturday Night Fever – a combination of the two.”

The show will be performed at every home and away game.

“We put in hundreds and hundreds of hours for one 10-minute show and we’ll be learning it all the way up till the end of September,” said Shaw. “That’s usually when we get it finished and then we work on perfecting it as we compete in October.

“It’s going to be a really fun unique show.”

The Powell band has approximately 160 members, said Shaw, and is one of the three largest in Knox County.