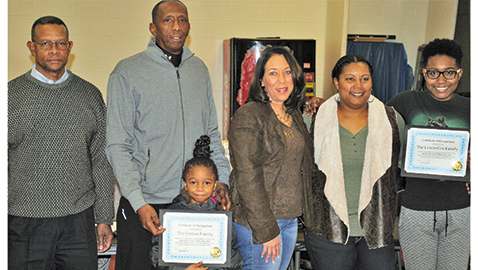 “Thank God everybody is alive. But it never should have happened.”

Those were the words of Alyssa Cox-Lewis, who was part of three families recognized by the Morningside Heights Homeowners Association Feb. 10 for assisting at an East Knoxville plane crash site in December.

After the Bingham, Jordan and Cox families were awarded certificates “for acts of heroism and kindness,” Cox-Lewis spoke out against pilot training methods used out of the small South Knoxville airport just across the Tennessee River.

“Different companies use Island Home to train pilots,” said Cox-Lewis. “They turn the engine off and they simulate engine failure to test the pilots that they are training to see their response to it.

“Ideally, they would get the engine back on and land the plane like normal. But essentially for about 30 seconds to a minute, they are engineless flying over our houses. And the failure of this plane (that crashed in East Knoxville) was caused by them being unable to start the engine again.”

Alyssa added: “We’ve known for years that they’ve been doing it … if you cut an engine over people’s houses, it’s only a matter of time before something happens.”

Melvin Tate, president of the Morningside Heights Homeowners Association, called it “the Miracle on Groner Drive.”

Even though the small plane crashed on top of a car parked in the driveway of the Bingham family at 1114 Groner Drive at 3:18 p.m. on Tuesday, Dec. 19, there were no fatalities or life-threatening injuries and the three men in the plane reportedly were taken to UT Medical Center.

Tate praised those who reached out in the emergency situation, despite what could have happened if the plane blew up.

“They just went right to doing their deeds,” he said.

Dexter Jordan lives right across the street from the crash site.

“My first concern was ‘OK, let’s see if anyone’s in the plane and are their okay?’” recalled Jordan.

“I called 911 and went immediately to the plane. One of the guys was trying to get out of the plane at the time I got there. So I tried to help him out best I could.”

Jordan said he saw Alyssa and her mom, Jackqulyn Cox, at the site.

“The community just was coming together,” he said. “We were trying to do what we needed to do as far as getting water on the plane and getting the people out of the plane.

“I guess you just block out the danger of it,” he added. “I know I did. You don’t think about it, just respond. There’s a need and how can I help?”

Alyssa said she had been invited over to her mom’s home, also on Groner Drive, for dinner.

“This (plane crash) you heard it and felt it in your bones,” she said.

Cox-Lewis said her mom and step dad are both “ex-Air Force and have been around plane crashes.” They went to the crash scene, got a hose and talked with members of Bingham family who were still inside their home.

One of the three men was already out of the plane, but two were still inside, including one with head lacerations, said Alyssa, who assisted with getting the other two out and with injuries until paramedics arrived.

“You could smell gas in the air,” said Cox-Lewis. “The engine wasn’t going, but the battery was still going. You could still hear it try to rotate and click on.

“The biggest thing to me was getting everybody out and everybody away. There was a job to do. Be quick and be efficient.”