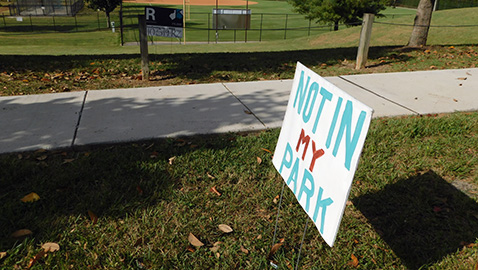 Two weeks ago The Focus reported on a Sept. 23 public-input meeting at the Knoxville Area Urban League about the proposed construction of a supportive housing facility on 5th Avenue.

After Director of Community Development Becky Wade laid out the plan – a plot of land adjacent to Caswell Park would be deeded free to the Volunteer Ministry Center, who would then build and run the facility – attendees were free to voice their questions and comments.

The free-wheeling response was, to say the least, vocal and passionate. Some were in favor of the facility; more weren’t. The animus of those opposed hinged primarily on developing land that was – and should stay – a part of Caswell Park.

At its monthly meeting on Thur., Oct 10, Knoxville-Knox Co. Planning took up the matter. At issue was whether to change the zoning designation from OS-2 (Park and Open Space) to RP-1 (Planned Residential). The original request was for designation RP-3, which would have allowed a higher density of housing units per acre.

As the Applicant, the City of Knoxville was represented by Bill Lyons, Chief Policy Officer to Mayor Madeline Rogero. Lyons was speaking on behalf of Wade, who was unable to attend.

“We’re dealing with three lots on Fifth Avenue adjacent to Caswell Park,” he said. “The public park was created in 1916 and updated with ball fields in 2002. At that time, the three-lot parcel was purchased for drainage and construction of an outfield fence. Since the purchase, the city has mowed the lots as a responsible property owner. A number of years ago this was placed in open space zoning, so we’re dealing with a present open-space situation.

“The Community Development Department was approached by VMC as a potential site for permanent supportive housing. These supportive housing projects serve the neediest among us. Mayor Rogero has placed a high priority on both affordable housing and the challenge of homelessness. This project is the intersection of both of those challenges. This site is very well suited for the eventual use of permanent supportive housing. It has a history of residential use and underuse prior to the time of the purchase. It’s within a block of a major bus line. The cost of the land won’t be an issue (since the city owns it).”

Twenty or so members of the opposition wore matching T-shirts. Their spokesperson was Dr. Greta Schmoyer, board member of the Parkridge Community Organization. Her objections to the plan were multiple.

“I’d like to open with a quote from Bill Lyons,” said Schmoyer. “The year was 2010. Dr. Lyons was writing in the News Sentinel about the 10-Year Plan to end chronic homelessness. ‘As it has become clear in recent months, the greatest challenge to the 10-Year Plan is to find places throughout our community for the residences. Some have suggested concentration. We believe that is not the answer.’”

Schmoyer quoted Lyons further as saying that certain neighborhoods, including Parkridge, “‘are carrying a disproportionate amount of the community burden through their proximity to the emergency services environment. Homelessness is a community problem that requires a community solution.’”

“Whether or not you agree with Dr. Lyons,” said Schmoyer, “concentrated poverty in east Knoxville is poor policy. The application before you today is so riddled with errors and the process of bringing it to your consideration, so deliberately shrouded, it must not go unchecked. The proposal is in violation of the Magnolia Avenue Corridor Plan and the One-Year Plan.”

Commissioner Art Clancy acknowledged that the issue was difficult and complex. “These are never, ever, easy decisions for us,” he said. “I have looked at this quite diligently. I don’t see anywhere that RP-1 is inconsistent with our One-Year Plan or our general plan. The Parkridge community is well-served with parks and open space. The people in Parkridge are some of the most acutely aware of people who need housing. They’re some of the most generous people and genuine people.”

Commissioner Andre Canty suggested the possibility of a 60-day postponement to further study the matter. According to Lyons, VMC needs full control of the land by next Jan. 1. “If this is delayed today, we won’t be able to meet that date,” Lyons said. “All the information you need is before you.”

Canty then asked Lyons whether any other locations had been considered for the facility. “We are approached by folks like VMC who put together a proposal, and they saw this site as very suitable land for their proposed development,” Lyons said. “We did take a look (at other places).”

The commission unanimously approved the plan for a maximum of 24 dwelling units per acre. The matter now goes before the City Council on Nov. 19. The Planning Commission next meets on Nov. 14.