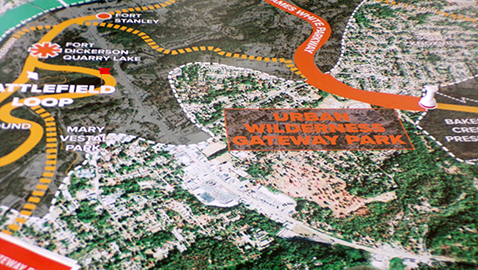 Plans were unveiled recently for the newest addition to Knoxville’s over 1,000 acres of urban wilderness when a  block party was held at the southern end of James White Parkway, the site of  the proposed Urban Wilderness Gateway Park.

Plans for the park include amenities such as a landscaped access point and gathering space at Baker Creek Preserve and at the southern end of James White Parkway, parking, pedestrian and bike pathways and trails, a bike park, additional children’s nature play areas, a rock climbing wall under the overpass and improved connectivity to existing neighborhoods, businesses, schools and the planned BMX facility at South-Doyle Middle School.

“It’s a big day” said city councilwoman Stephanie Welch, whose South Knoxville district includes the area of the park. She said that when she first came to Knoxville in 1995 she discovered what she called “a road to nowhere,” at James White Parkway. At that time she thought the end of the parkway would make a good park and now, 23 years later, she said they were officially starting the process to create that park. “One of the things I like about Knoxville is how engaged our community is,” Welch said.

“This gateway park is ours to shape and create,” asserted Rebekah J. Montgomery, who oversees urban wilderness projects for the city.  She said that conceptual plans are being formed and planners wanted to hear from the people.  “What makes South Knoxville special is our neighborhoods,” said Montgomery as she recognized representatives of several neighborhood associations present.

A brief downpour before the program began did not dampen spirits as people gathered under a tent cooled by fans to view conceptual drawings and hear a description of what is planned. Nearby was a large model of what the finished park would look like. Guests were asked to fill out survey forms listing what they liked about Knoxville’s urban wilderness, their favorite things to do in the urban wilderness and the thing they would most like to see in the gateway park. On a large map of South Knoxville showing the proposed park they were asked to use colored push pins to mark their houses. After the speeches, vendors were on hand to serve cooling refreshments and there was a play area for children.

Construction is scheduled to start next year on phase 1 of the project with ribbon cutting on that phase to be held in 2020.