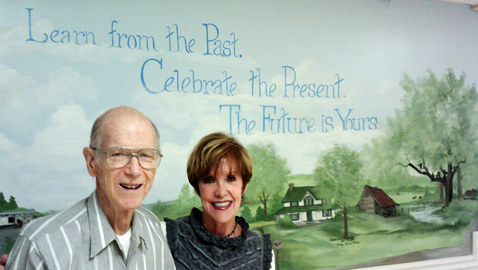 Pleasant Ridge Elementary School has a unique window to the past thanks to artist Gale Hinton. She recently covered the walls of the school’s hallway with murals. The most striking and probably the most personal is dedicated to the Nickle family.

While the Knoxville native did not go to school at Pleasant Ridge, as a child she went to church with the Nickle family at Virginia Avenue Methodist Church and played with the Nickle children, all of whom attended Pleasant Ridge. The striking mural contains the boyhood home of Louis Nickle, 87, and his present house. It also depicts the house of his grandfather, William Harrison Nickle, which once stood on Sullivan Road. In addition the mural pictures the famous airplane service station turned barber shop on Clinton Highway.

Of the five siblings in Nickle’s family, four are still living, including his 96-year-old sister, who once lived in a house built on the site of their grandfather’s house.

The mural also shows the Nickle’s pond and barn and the tree in which the children played. Hinton pointed out herself in the mural as a child playing in the tree along with several of the Nickle children.

Nickle said that he has an 1895 map that showed four Nickle brothers owned most of the property from Pleasant Ridge Road up Sullivan Road. At that time Clinton Highway was not in existence and Pleasant Ridge was the main road to Clinton. The small plot his current house stands on is the last property remaining in the Nickle family.

Nickle also has a copy of the deed that records the $200 sale of the land for the school. The first Pleasant Ridge School, a two room wooden building, was built in 1906. Nickle said his father was the first graduate in 1908. Another mural shows the second Pleasant Ridge School from which Nickle graduated with 17 others in 1944. It was a brick building with two outhouses, one for the girls and one for the boys and a well with a hand pump. He said the pump had a pipe extending from it with holes that the students used for a water fountain. He said that when the girls were drinking the boys would pump the pump extra hard so the girls would be squirted. The principal was Irene Easterly for whom Easterly Way is named.

In 1925 Nickle’s father and his uncle opened Herbert Nickel’s Furniture Store on Western Avenue. When he was old enough Nickle went to work at the store. It was the only job he ever held except for his time in the Army during the Korean War. When Western Avenue was four laned he was 67. Nickle told his wife he was too old to relocate so he had a going out of business sale.

Hinton Studied art at UT and at Ringling College of Art and Design in Sarasota, Florida. During her 50 years in the business Hinton has painted over 20,000 murals of all types all over the country including other Knox County schools, Dollywood, and the McDonalds Playlands. Some of her murals are five stories tall.

Except for the mural dedicated to the Nickle family, Hinton said the other Pleasant Ridge murals where for the children and include inspirational quotes from such varied sources as Magic Johnson and Albert Einstein. All of her murals contain her trademark, spiders. In one mural the spiders are in riding a boat. The entire project took two and one half days.