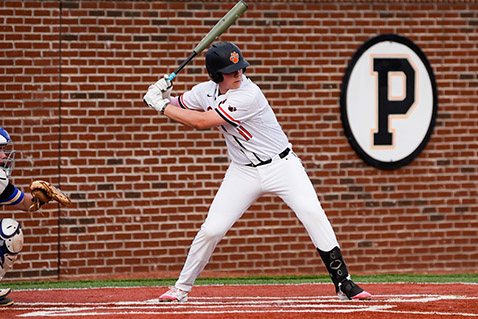 Hard work has been the foundation of Logan Poteet’s success in baseball.

The Powell High senior catcher helped lead the Panthers to the TSSAA Class 4A state tournament this spring and he’s also been a standout in the classroom.

That combination has earned him the honor of being named the PHS male Student-Athlete of the Year.

“Logan is one of the hardest workers in our program,” said Josh Warner, Powell’s baseball coach, in May. “He has gone above and beyond in the weight room, on the field and in all of the individual skill development. This has transformed him into an SEC signee as he is committed to Vanderbilt University.”

The 6-2, 205-pounder was selected this season’s District 3-4A Most Valuable Player and he was a candidate for the Tennessee Baseball Coaches Association’s Mr. Baseball award, noted Warren.

“He has excelled not only in baseball but in academics (3.6 GPA) and has been a great citizen in our school,” said the Panthers’ coach. “He defines what it is to be a student-athlete at Powell High School.”

Reagan Trumm, who put her name in the TSSAA basketball record book during her prep career, is Powell High’s female honoree.

During her senior season, Trumm averaged 25 points per game to move past the 2,000-point mark in her career. She also averaged five rebounds, two assists and two steals.

The awards the 5-9 guard received in the 2021-22 season included being named to The Knoxville Focus / Coaches’ All-Knox County first team.

“Reagan is a very talented kid that has been a pleasure to coach,” said Powell Coach John Fisher. “The time she has put into the game is a testament to her dedication and work ethic. She will be missed.”

Reagan signed with Western Carolina University and will rejoin her sister Bailey on the basketball court there.

Both are in the TSSAA record book and still rank No. 1. Reagan earned that distinction for free throw percentage during her junior season when she made 94.5 percent of her attempts from the foul line.