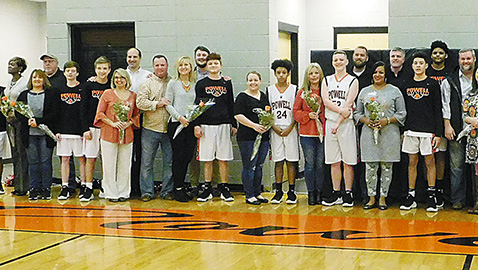 Coach Darin Courtney saw his Powell Middle School boys basketball team do exactly what we wanted when it took the floor for its final regular-season home game early last week.

The Panthers got off to a fast start and cruised to a 52-18 Knox County Middle School Basketball Conference victory over Holston in Powell on Monday, Dec. 17.

The Panthers employed a stifling defense and kept the Hurricanes at bay throughout the contest on a night when Powell honored its eighth graders. The Panthers have made a habit of winning on eighth grade night since Courtney arrived at the school nearly two decades ago.

“We always want to leave with smiles on our faces on eighth grade night,” Courtney said.

On this night, the veteran coach had plenty to smile about as his defense worked to perfection against a Holston squad that has had its share of troubles this season.

“Our defense is playing the best it’s played all year,” Courtney said. “Our 1-3-1 is working. In the last three games, there haven’t been a lot of shots going up from the other team.

“I’m proud of the effort that we’ve shown on defense.”

The Hurricanes didn’t manage too many shots as the Panthers (who won their conference finale at Karns Thursday night to improve to 16-2 overall and 13-2 in league play), darted out to a 11-0 lead when Cassen Huffaker made a pair of free throws just past the midway point of the first quarter.

Holston, which endured nearly four minutes of futility out of the gate, finally scored when Eli Hubbs made a basket with 2 minutes, 21 seconds remaining in the opening frame.

When the dust had settled, the Panthers, who held a 14-4 advantage by first quarter’s end, expanded their advantage to 33-10 at halftime. Powell was also hot after the break as it went on a 13-4 run in the third quarter to take a 46-14 lead heading into the final frame.

The Panthers were also able to manufacture plenty of offense. Bryce Burkhart scored 14 points, all before halftime.

“His output has been as good as anybody who has ever played here for two years,” Courtney said. “And we’ve had such comfortable leads that he hasn’t played much in the fourth quarters of our games.”

Ayden Greene added 11 points for the Panthers. Bryce Jardret scored 10. Ricardo Holston finished with seven. Huffaker had five points and six rebounds. Defensively, Emmett Burns was an inside force for the Panthers as he had four blocked shots.