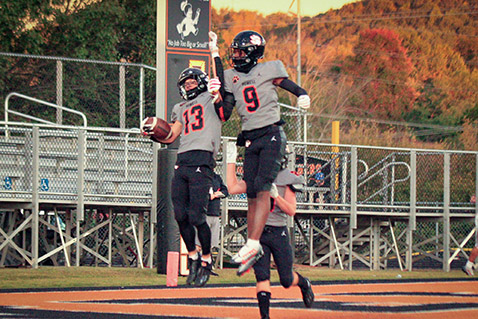 Panthers take lead in Region 2-3A

Powell’s defense has been getting better and better since the start of the season.

Oak Ridge was the latest to find that out Friday night.

The Panthers, who began the season with six new starters, pounded the Wildcats 30-14 at Scarbro Stadium to take sole possession of first place in Region 2-5A.

“Honestly, it’s kind of been that way the last few games,” said Jeff Lusby, Powell’s defensive coordinator. “And then I really think we peaked last night with how physical we played.

“Oak Ridge matches up with us skill kid wise, but I think what we did in the box up front set the tone for us with how physical we were at the line of scrimmage.”

It wasn’t just the defense that looked impressive on Homecoming night for the Orange and Black, as the offensive unit and kicking game also performed well.

Powell jumped out to a 7-0 lead but saw Oak Ridge come back to even the score with a minute left in the first quarter. The game remained tied until Dylan Stooksbury kicked a 32-yard field goal on the last play of the first half to put the Panthers ahead 10-7.

Powell halted a potential go-ahead drive by Oak Ridge in the second quarter and again at the start of the third period before pulling away.

While the new starters have made tons of progress, Lusby said senior J.J. Foust and junior Steven Soles remain the defensive leaders.

“Those two guys, game in and game out, are the best I’ve seen in high school football at what they can do. They are special players.

“In our 4-2-5 defense, Foust is our nickel/sam guy. He can play in the box or out in coverage and he does both of them so well. He’s so smart as a football player. A lot of times you make a call and just tell J.J. to play football. He’s started every game both ways all four years.”

“He’s so quick and nasty. He likes to create havoc. Opposing offenses have to scheme for No. 6. He can play all four positions up front. He’s that athletic.”

Sophomore standout Connor Wheeler again was a big-play guy for Powell. He scored the game’s first touchdown on a 53-yard run and had a 41-yard run to set up the field goal before halftime.

On Oak Ridge’s first possession of the second half, Wheeler stopped the Wildcats’ drive by intercepting Ethan Garza’s pass at the 12 and returning it 33 yards to the 45. That led to Jordyn Potts’ 31-yard pass to Adarius Redmond that upped the Panthers’ lead to 17-7.

Later in the quarter, Potts connected with Gianni “The Flash” Magdos on a 42-yard TD play. It was a perfect throw and catch.

Potts completed a 33-yard pass to Foust at the OR 17 and then ran it in from there to up the score to 30-7 midway through the final period.

The Wildcats scored on a fluke play with three seconds to go. Powell’s Adam Weaver deflected a pass up into the air and the ball fell into the hands of Oak Ridge’s VaShawn Nalls in the end zone.

In addition to his field goal, Stooksbury’s punting provided Powell with excellent field position in the first half. He had a 55-yarder that rolled to the OR 9-yard line and later a 65-yarder that was downed at the Wildcats’ 3-yard line.

GET WELL WISHES: Powell sophomore Charvon Thomas suffered a leg injury in the third period. After being attended by medical personnel and placed on a cart, fans applauded him and the entire team came over to give him get well wishes as he was rolled off the field.