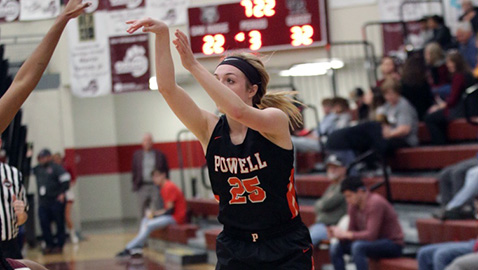 Powell High’s Bailey Trumm was closing in on a TSSAA state record for career 3-point baskets Tuesday night at Oak Ridge, but that wasn’t her No. 1 objective.

It was winning the game and tying the Lady Wildcats for the top seed in District 3-AAA, and for that to happen, free throws became bigger than 3-pointers in the final quarter.

Trumm tied the record and gave the Lady Panthers a 13-point lead with her fifth trey in the first minute after intermission. But she wouldn’t make another one on Jill Prudden Court the rest of the night and Powell had to withstand a furious Oak Ridge rally in the game’s final minute to notch a 57-54 victory.

“I wasn’t worried about that (the record) tonight,” said Trumm. “That’s going to come. The biggest thing was just beating Oak Ridge and getting tied for that No. 1 seed because we need that and that’s more important than any record.”

Khamari Mitchell-Skeen drilled a 3-point shot from the left of the circle to cut the deficit to seven, Powell turned the ball over and Bri Dunbar hit a trey at the top of the circle to make it a four-point game (55-51) with still 32 seconds remaining.

The Lady Panthers broke OR’s full-court press and Reagan Trumm made two huge free throws to push the lead back to six 57-51.

Dunbar, however, struck again, this time a good eight feet behind the circle, to pull the Lady Wildcats within three.

Powell put the ball in play and called a timeout with 12.6 seconds to go. When play resumed, the Lady Panthers committed a throw-in violation, giving Oak Ridge one more chance. But Mitchell-Skeen’s 3-point attempt was off the mark.

“She was clutch. We practice free throws a lot. She didn’t get nervous, she didn’t feel the pressure. She just knocked them down and we wouldn’t have won the game, if she didn’t make them.”

Reagan and Bailey finished with 22 and 19 points, respectively, and each made five 3-pointers. The Lady Panthers made a dozen treys in all, with Savanna Parker and Hayden Dye adding one each.

Dunbar led Oak Ridge with 21 points. The Lady Wildcats made seven 3-pointers and 11 of 18 foul shots.

“We hadn’t beaten Oak Ridge in a lot of years,” said Powell Coach John Fisher. “We’ve competed and showed signs that we could compete, but never have gotten over the hump and been able to knock them off.

“We played them a couple of weeks ago on TV (55-48 loss) and I left with a bad feeling. They outworked us and we didn’t compete like we need to compete.

“I thought tonight our bunch was dialed in and were mentally strong and played great defensively. All the keys that we said we had to do to win, we did it.”

THE RECORD: Bailey Trumm is now tied with Kendall Spray with 390 career 3-pointers. Spray played at Wilson Central High (2012-16) and is now a guard at Clemson University.