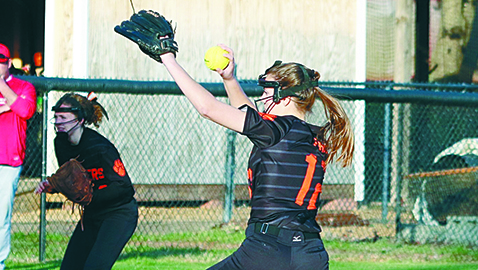 Allison Farr and Riley Bryant, Powell High’s Student-Athletes of the Year, will both be continuing their education and athletic careers at East Tennessee State University in Johnson City.

In high school, Farr was a standout pitcher and helped lead the Lady Panthers to the TSSAA Class AAA state championship as a junior in 2018, while Bryant was a key figure in helping Powell begin its return to football glory days.

“Allison has been a vital part of putting Powell back on top as one of the best softball programs in the state,” said PHS Athletic Director Chad Smith. “She excelled in the classroom and on the field.”

Farr was the 2018 Player of the Year, an All-State pitcher and a four-time All-District 3-AAA performer. In her sophomore season, Powell also made it to the state finals and finished runner-up.

“Ali will provide an instant boost to our pitching staff,” said ETSU Coach Brad Irwin after the signing.

“Allison has had a tremendous career here at Powell,” said Powell Head Coach Jeff Inman. “Amazing young lady who has dominated on the mound for the past four years.  I’m looking forward to following her journey at ETSU.”

Bryant was a dynamic and exciting player for the Panthers’ football program. He will be headed to ETSU as a preferred walk-on.

“Riley represented Powell Football and the Powell Community as a first class example of what a student-athlete should be,” said Smith.

“He was a multi-year All-Region 3-5A wide receiver and defensive back and played multiple positions at an all-star level. His commitment to academics and his fellow students define the character we hope all PHS athletes represent.”

The 5-8, 165-pound Bryant was a first team selection on The Knoxville Focus / Coaches’ 2018 All-Knox County team and received a scholarship offer from Lindsey Wilson College before deciding to join the Buccaneers.

Riley also was a track and field athlete at Powell, competing as a sprinter and 300-meter hurdler and also as a long jumper and triple jumper. He finished fourth in the long jump and seventh in the triple jump in this year’s KIL Championships.