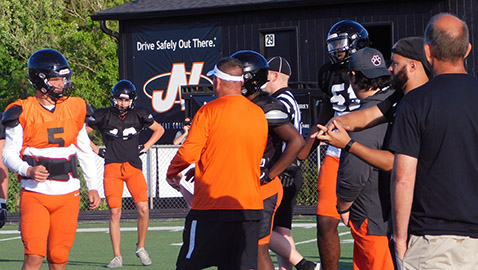 High school football in May will attract a pretty good crowd, particularly when the two teams involved are defending state champions.

Alcoa, the Blount County manufacturer of the most state titles (20) in Tennessee since the classification era began in 1969, came to Powell last week to scrimmage the Panthers, who brought home the Class 5A gold football in December – their first-ever state crown.

TSSAA rules allow for each team to only have one practice versus another opponent in the spring, so Powell Head Coach Matt Lowe wanted to make it a good one, which came as no surprise to Panther fans. Lowe put together one of the most attractive and challenging regular season schedules in the state in 2021.

With region baseball and softball games also being played on the Powell campus the same day, needless to say, parking spilled over.

“There were a lot of plays made on both sides of the ball by both teams, so we are extremely excited,” said Powell Head Coach Matt Lowe. “We saw some young guys that certainly stepped up and look like they are going to be major contributors starting in the fall. Those are the things you are always looking for in the spring.”

Lowe pointed out he and his coaches already have “a good idea” of what they will be getting from their returning varsity players. They are looking for those young guys – backups or JV-type players a year ago – that are ready to make that jump.

“We think we got some of those questions answered,” he said.

Lowe also noted there’s a long way between now and August and a lot of development that will need to continue to happen for those kids to take a major step forward.

What’s it like coming off a state championship season?

“So much has been made of all the accomplishments of that ’21 team. “It’s great to share those experiences with so many people in the community and the kids that were on that team. It’s been something that none of us will ever forget.”

But at some point you’ve got to turn the page, said the Powell coach.

“You got to start to prepare this group of young men to go on a journey that hopefully leads in the same direction.

“It’s a long season and you got to pace things out. You also have to remember these are kids. They need summertime. They need to go to the lake or pool. They need to sleep in every now and then.

“When late July and August gets here, they got to be ready to handle the heat and be able to endure the entire season. If it’s done right, it’s a 13, 14 or 15-game season. You’ve got to be able to pace that out as you go through it.”

To deal with the grind of a long season, it’s broken down into segments.

“Every coach has said ‘one game at a time,’ but at the same time, you break it down from there,” said Lowe.. “You just go day by day for continuous improvement.”

The Alcoa vs. Powell matchup

“There was a lot of talent on the field,” acknowledged Coach Lowe. “It was a great scrimmage and I think both teams became better because of it.”

What about a score?

“We’re all highly competitive people, but anytime you’re talking about 1s, 2s and 3s and mixing it up, it’s awfully tough to tell,” said Lowe. “Both teams scored and had great offensive plays and both teams had some great defensive plays.”

But choosing a winner wouldn’t hold much weight, Lowe figured.

Unofficially, with the scrimmage more than halfway over, one adult on the Powell sideline said each team had scored two times. Then it became three scores for each team. And finally, on the last play, Alcoa scored again.

You can add it up if you want, but never has a high school football game been won in May. The scoreboard will be turned on in August.