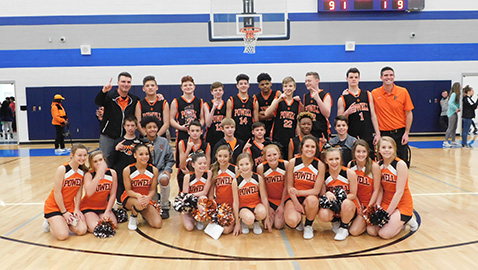 Powell Coach Darin Courtney said he couldn’t remember a better first-half performance than the one his team had in its TMSAA sectional championship victory over Vine on Feb. 2.

“That was the best basketball we’ve played on that big of a stage and against a talented team,” said Courtney, who is in his 17th season as head coach at Powell Middle.

The Panthers scored 33 points in 12 minutes against the Golden Bears that afternoon at Hardin Valley Middle. That would have been the equivalent of a high school team scoring 44 points by halftime. (Middle school quarters last six minutes and high school quarters eight minutes).

Even more impressive was Powell’s second-period showing as it outscored Vine 21-3. That would have equated to a 28-point quarter in high school.

“Our defense was playing as hard as it could play, and you could do that with the momentum we had,” explained Courtney when asked about his team’s remarkable performance.

Powell (26-2) went on to capture the Section 1 AAA crown with a 46-31 win and qualified for the TMSAA state tournament’s Final Four.

“It’s an unreal feeling,” said Courtney. “It took a great group of kids to win the Knox County tournament by defeating regular season champion Vine and then two weeks later do it again in the sectionals, plus get a win over Cleveland, one of the best teams in the state (in semifinals).”

The balanced Panthers got 14 points from Ayden Greene, 13 from tourney MVP Bryce Burkhart and 12 from Bryce Jardret. Cassen Huffaker chipped in seven points – all in the first half explosion. Emmett Burns didn’t score a single point but had a major impact on the game, blocking a school record 12 shots and collecting 10 rebounds.

Powell went on a 17-0 run in the second period to pull away. It started with three straight 3-pointers by Burkhart, Jardet and Greene.

Greene scored in the lane on the opening possession of the second half to give Powell its biggest lead of the game (35-12). But Vine ended the third period with an 8-1 run to pull within 15 (40-25).

The Bears reduced the gap to 11 (40-29) and Powell began protecting the ball more and taking more time off the clock at the 4-minute mark of the final period.

Greene picked up a loose ball and scored on a layup to push the lead back to 13 (42-29) with 3:01 on the clock. The Panthers backed out and started holding the ball at 2:20, forcing Vine to foul.

Burkhart twice hit both ends of a 1-and-1 to all but seal the victory.

Burkhart said hard work and good team chemistry had been keys to the Panthers’ special season.

As far as advancing to the state tourney, the eighth grader added, “It gives us a chance to show our talent in another part of the state and it lets other people see how Knox County players play ball.”

SNIP, SNIP: Coach Courtney expressed thanks to tournament director Dylan Rayho for allowing the Panthers to cut down the net, even if they didn’t have a ladder. Spencer Burkhart, Bryce’s dad, and assistant coach Steve Waugh plus teammates helped hoist players up so they could do the cutting.

“I’m happy he let us do that,” said Courtney. “It was the biggest win in the history of our school. I wanted our boys to have that moment.”