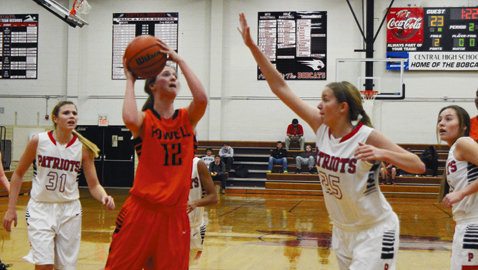 Photo by Dan Andrews.
Powell’s Jill Gorman (12) attempts to shoot over a Jefferson County defender in the Lady Panthers’ 52-42 win over the Lady Patriots Tuesday in the U.S. Cellular Basketball Tournament at Central High School.

For the first quarter of its game Tuesday afternoon the Powell High School girls basketball team was sleepwalking.

But when the Lady Panthers finally answered their wake-up call, they were able to defeat Jefferson County 52-42 in the first round of the U.S. Cellular Basketball Tournament at Central High School.

“I don’t think we were ready to play [in the first quarter],” Powell coach Caitlin Hollifield said. “We want to come out and start games like we finish them and we’ve been preaching about that all year.

The Lady Panthers (3-0) may have beaten the Lady Patriots (2-2) easily but early on, it didn’t look like Powell was going to beat anybody.

Jefferson County hammered the seemingly slumbering Lady Panthers early and opened a 12-3 lead before Powell finally shook off its lethargy and pulled to within 17-14 by first quarter’s end.

The Lady Panthers would eventually take their first lead, an 18-17 advantage, with 5 minutes, 19 seconds remaining in the second quarter by senior Shea Coker, who scored a game-high 24 points in the contest and had many of her points when the Lady Patriots were on runs and attempting to get back in the game.

“Shea always hits big shots for us and she did it again today,” Hollifield said. “She’s like a dagger.

“She scored points for us when we really needed them. She scored when they were getting momentum and trying to go on runs.”

Coker wasn’t the only star for the Lady Panthers on this night. Senior center Damaiya Moore was a dominant force in the paint. After a sluggish start, Moore rebounded to control the boards and score 15 points. Her late bucket in the first quarter pulled Powell within 14-12. She also had a basket early in the third stanza gave the Lady Panthers a 33-24 lead with 6:43 left.

That basket all but clinched things for the Lady Panthers.

“Damaiya was big for us tonight,” Hollifield said. “She’s long and she always plays good defense down low.

“She did a great job for us on the boards and she played good post defense. Our defense is why we won this game. Our defense was extremely strong. Our guards pressured the ball well.”