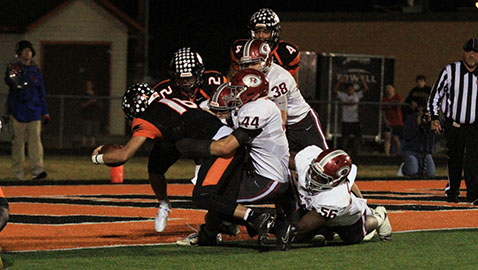 The undefeated Powell Panthers entered last Thursday night’s game against Oak Ridge knowing that with a win, they’d capture a region championship.  It wasn’t easy and took 20 unanswered points against a game Oak Ridge squad to do it, but the Panthers survived 27-21.

“It’s huge,” said Powell head coach Matt Lowe. “These kids set out a goal at the beginning of the year to get to this point… to win a region title and on top of that to be 9-0. So far all they hoped to accomplish has happened.”

The game didn’t start as planned for the Panthers.  In the first quarter Oak Ridge (5-4, 3-2 in Region 3-5A) got on the scoreboard first when Kendall Jackson outraced the Powell defense with an 85-yard sprint to the end zone, making it 7-0 Wildcats. It was the biggest play in a monster game for Jackson, with 196 yards rushing and two touchdowns.

Powell responded with a 57-yard touchdown run by Bailor Hughes to tie the game at 7 later in the first quarter.  But the next two quarters were filled with frustration for the Panthers offense.  They went scoreless while the Wildcats added two touchdowns.  It was 21-7 entering the fourth quarter and things looked bleak for the home team.

But Powell (9-0, 6-0 in Region 3-5A) responded in a big way.  Quarterback Walker Trusley completed two short touchdown drives with two short touchdown runs, to even the game at 21 with four minutes to go.  Powell’s defense held again and gave the offense good field position after an Oak Ridge punt, starting at their own 44 with just over a minute to go. They drove down the field and scored the winning touchdown when Trusley avoided pressure and threw a 22-yard strike to Tyler Kirkess in the end zone for a touchdown with only 16 seconds remaining.

“We were trying to score points,” said Lowe. “We had some opportunities early and certainly didn’t capitalize on those.  We felt like we had some guys that could make plays in the vertical passing game and it turned out that was the case.  Trusley’s feet made a play in the backfield and finding senior Tyler Kirkess streaking across.”

When Kirkess intercepted a final Wildcats pass a few seconds later, a wild comeback was complete.

“The offense caught fire in the fourth quarter,” said Lowe. “At that point you are awfully proud of those guys and finding a way to really get it going.”

This comeback win for Powell comes a week after a gutsy 21-20 overtime victory over previously undefeated West, a win that was secured after stopping the Rebels two-point conversion attempt.

“It was an unbelievable effort from Oak Ridge. All the credit goes to their coaching staff and their team and the execution of their game plan.  They have some talented kids, but our kids found a way to win tonight. I couldn’t be more proud of them.”

Powell is now in good position to make a run to the state championship game in Cookeville. They’ll try to finish the regular season undefeated when they travel to South-Doyle on Friday night.