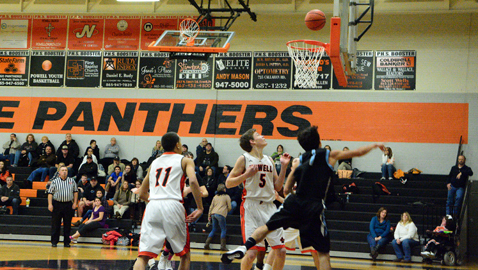 “Gibbs came out and shot the ball well in the first half and I told our guys to just keep doing what we were doing in the first half,” Panthers coach Gary Barnes said after Powell exploded in the second half en route to 66-45 District 3-AAA victory over the Eagles Tuesday night at Jeff Hunter Gymnasium.

“We told the kids that us playing five [players] in and five out, and pushing the ball usually has a cumulative effect,” Barnes said. “And tonight, that’s what happened in the third quarter.”

The Panthers also got a huge third-quarter offensive boost from junior Quinton Fields. He was held scoreless in the first half but he scored Powell’s final 10 points of the third quarter and helped his team open a 48-31 by the end of the third frame.

“Quinton is explosive,” Barnes said. “He’s capable of getting a lot of points quick.”

The Eagles had a 25-24 lead at halftime before the Panthers used a 24-6 run to put the game out of reach.

In addition, Powell clamped down on defense as Gibbs made just six of its 24 field goal attempts after halftime.

The second-half collapse has become all too common for the Eagles.

“It has kind of been the story for us in the second half,” Gibbs coach Timmy Meade said. “We play good for a couple of quarters, and then have an off quarter.

“We have to figure out how to play a complete game. We’ve got to get over that hurdle.”