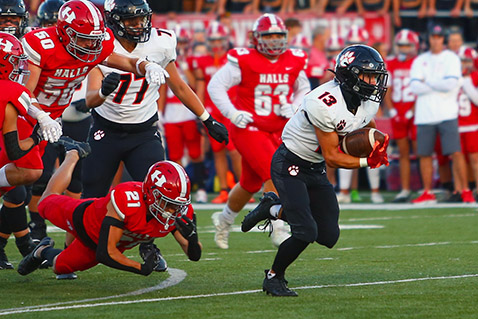 Powell hit Halls with big plays in the annual Battle of Emory Road Friday night and left Halls Crossroads with a 33-3 victory.

With the first touch of football weather in the air, the Red Devils tried to answer when they fell behind early but couldn’t get in the end zone at Dinzel “Dink” Adams Field.

Powell senior quarterback Jordyn Potts, who said he felt close to being 100 percent again after being injured in the season opener against Anderson County and missing playing time until Week 3 against Karns, hooked up with wide receiver Ayden Greene for 68 and 67-yard touchdown plays.

“I feel pretty close to it (100 percent),” said Potts. “Last week (at Clinton) was my first time I was actually comfortable since being injured. Now I feel like I’m 100 percent.

“I think this was the first game that we’ve clicked on both sides together and played as a team finally, so I’m really proud of us,” added Potts, a Tennessee Tech commitment, who helped lead the Panthers to the Class 5A state championship last year.

“We all know if we play as a team, we’re pretty close to being unbeatable.”

The Panthers’ first big play of the game against Halls came on their opening possession when hard-running sophomore Connor Wheeler broke loose up the middle and raced 49 yards to score. Dylan Stooksbury added the PAT kick.

After Halls’ second punt, Greene raced past a Red Devil defensive back on the sideline in front of the Powell bench and Potts hit him in full stride to make it 13-0.

Late in the first quarter, Powell was threatening again, but Wheeler fumbled and Brody Rogers recovered.

Pass plays of 39 and 32 yards by Halls QB Amari Lethgo to Camden Johnson advanced the Red Devils to the Powell 15-yard line. But Adarius Redmond and J.J. Foust stopped Nolan Faust for a two-yard loss at the 7 and a third down pass fell incomplete.

Halls had to settle for a 29-yard field goal by Owen Taylor.

The Red Devils, however, recovered an onside kick and were back in business at the Powell 44. They drove to the 9-yard line and had a fourth-and-two situation, with a chance to cut the deficit to three points. After a timeout, Faust took the snap in the shotgun but his pass to Drew Ross fell incomplete.

“We started coming on offensively and made some plays when we had to make plays, but at the end of the day, we just didn’t finish,” said first-year Halls Head Coach Brent Hughes. “That was kind of the story of the night for us.

“Defensively, we didn’t tackle very well,” added Hughes. “We never really took them out of their game plan. We got to be better at the basic fundamentals, which is tackling and getting to the football and that’s something we will continue to work on.”

The Panthers invoked the mercy rule quickly in the third quarter. Potts and Greene combined for their second TD play down the sideline and Gianni Magdos’ pick six plus Stooksbury’s PAT made the difference 30 points.

Powell reserves played in the fourth quarter and the Panthers unfortunately saw running back Fabby Neiwoh be helped off the field with an injury.