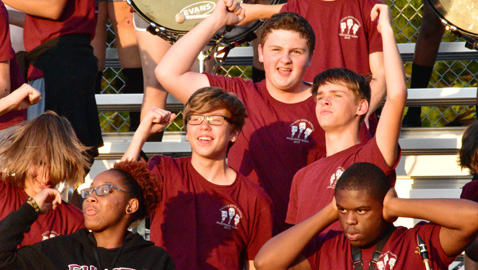 “We still have a lot of work to do, but this is a win we felt we had to have,” said Ellison, after the Panthers evened their Region 3-5A record at 1-1 and improved to 3-1 overall.

“Our players just kept working all night,” added Ellison. “We had some dropped passes and some penalties that kept us from scoring a few other times, but in the end, when it counted most, these young men stepped up and put it away.”

Sophomore quarterback Walker Trusley completed 20 of 30 attempts for 257 yards and one touchdown and ran 10 times for 35 yards.

Riley Bryant caught six passes for 93 yards, rushed three times for 21 yards and led the defense with eight tackles and an interception.

Bailor Walker also was a big contributor in the victory as he had two interceptions plus offensively rushed for 46 yards and a TD and caught four passes for 35 yards.

Powell will make its home debut this week against Clinton in another region game. A big turnout is expected to be on hand to welcome the Panthers home after four road trips.

The Week 5 schedule also includes South-Doyle at Sevier County (Rivalry Thursday on MyVLT) and West at Oak Ridge plus Grace Christian at Webb and The King’s Academy at Mt. Juliet Christian in Division II conference games.

“It was fun to get my first win at Grace,” said Bradley. “I was proud of the way everyone responded to the loss to King’s Academy. We won the Boyd Buchanan game with the preparation that was put in by the players on Monday through Thursday. We came out and started fast so I was proud of their focus.”

Grace Christian, coming off an open date, faces a tough test at Webb this week.

“We have used the open date to rest and then get in two good practices where we focus on improving fundamentals,” said Bradley. “Obviously, the game with Webb will be a big challenge for us. They are always a very disciplined team. This Webb team is the fastest Webb team I have seen in a long time.”

PREPS OF THE PAST: Fifteen years ago, on Sept. 6, 2002 — After defending Class AAA state champion Austin-East took a 13-8 lead over Fulton in the third quarter, Buddy Pannell returned the ensuing kickoff 86 yards for the Falcons’ game-winning touchdown in a 14-13 victory. It was the Fulton seniors’ first win over the Roadrunners in their prep careers. Jeffrey Phillips was a first-year quarterback for A-E in that game. (Today Phillips is in his fifth season as Austin-East’s head coach).