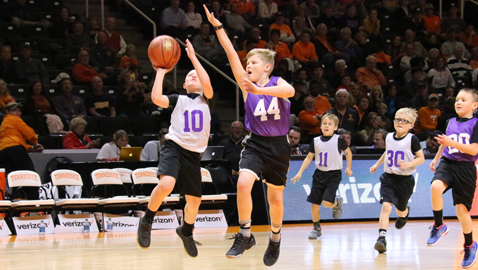 The opportunity of just getting to go to a University of Tennessee basketball game is thrilling enough for most 8-year-old boys, but to actually get to play on the Vols’ court before thousands of fans makes for a lifelong memory.

Scoring a game-high six points, as third grader Eli Miller did, has to move the excitement meter up a notch, too.

But that was the kind of night Miller and his teammates had on Dec. 13 as The King’s Academy’s third grade team got to play an exhibition intra-squad scrimmage at halftime of Tennessee’s game against Tennessee Tech at Thompson-Boling Arena.

Talk about show and tell the next day!

“The excitement pregame was difficult to control as the kids were literally bouncing off the walls,” said assistant coach Andy Wallace via e-mail last week. “Watching them talk about what was going to happen during the game was almost as rewarding as actually watching them play.

“After the game, it took them a while to catch their breath, as we had no subs, but you could see their joy in their wide eyes as they walked off the floor. It was an experience that they will remember for the rest of their lives.”

The Purple and White Lions play in the Sevier County Junior League and have a 5-0 record this season.

“The score (in the exhibition) wasn’t kept and frankly I think it was pretty even,” said Wallace, who noted that the team’s head coach, Joe Tarwater, had to miss the game.

“Prior to the game I emphasized to the players that if they did have a chance to score to try and pass to give their teammates the same opportunity, as we only had about five to seven minutes to actually play. Everyone did a good job in following those instructions.

“It seemed like nerves were affecting our shooting early as some players were missing shots that I would normally expect them to make. Of our 10 players on the court, seven of them scored.”

There are 17 teams in the Sevier County Junior League with two divisions.

Wallace was asked how the recent tragedy of wildfires affected The King’s Academy team and school and other league members?

“The games that were scheduled the Saturday after the fires were cancelled league wide,” said Wallace. “My understanding is that 28 families involved in the Sevier County Junior League suffered losses as a result of the fires.

“Our school was invited to join Boyds Creek, Seymour and Caton’s Chapel to play games at Boyd’s Creek Elementary (since the fires did not have as big of a direct impact on our community). We used it as a fund raiser to help the 28 families that were affected. The event raised $4700 towards their help.

“We continue to pray for them and seek opportunities to serve as we realize the process will be ongoing for months to come.”