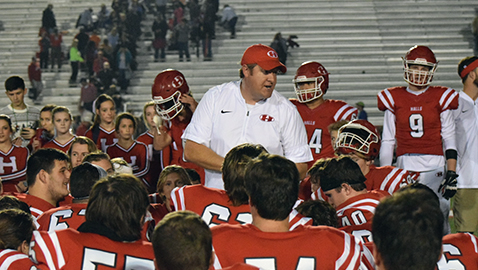 It had been a rather quiet off-season on the local high school football coaching scene until about two weeks ago.

Before then, only two schools had undergone head coaching changes since the end of the 2017 campaign.

Jerry Cooper stepped down at Seymour soon after the Eagles’ winless campaign last fall, and Scott Galyon, a former Seymour High great who went on to play at UT and in the NFL, was a popular choice to replace him in late November.

The announcement of Brad Conley retiring from coaching at Gibbs came as a surprise Jan. 9. He had been head coach for 10 years and guided the Eagles to the Region 2-5A title in 2016. Defensive coordinator Brad Turner was elevated to the head post in early March.

A month passed and with spring practice for most teams not far off, no other changes were anticipated.

But like a low-scoring game that has a flurry of touchdowns in the closing minutes, news of more coaching changes piled up in a hurry.

At Powell, Coach Rodney Ellison on April 2 put on his Twitter account the first inkling of his resignation. Oddly enough, four days before on March 29, Ellison had tweeted, “It was a great week of workouts for the Panthers! Spring practice is just over a month away.”

Later that week, J.D. Overton announced April 5 he was stepping down at Halls. He had been honored as the Region 2-5A Coach of the Year after rallying the Red Devils to the region championship.

Ellison tweeted on April 9 he would be an assistant coach on Steve Matthews’ staff at Knoxville Catholic, which captured the Class 5A state crown last season.

And the morning after, on April 10, it was reported that Matt Lowe was leaving The King’s Academy to return “home” to Powell, where he had previously coached with great success and also starred as a player himself in the mid-1990s.

“When the opportunity came, I think it was the right time and the right fit … for us as a family and me individually to get back to where everything started.”

Lowe, 41, had informed TKA administrators of his decision last Monday (April 9) and was introduced to the Powell squad the following day.

“We talked for maybe five to 10 minutes,” he said. “It was great to see those smiling faces. You could tell there is a lot of excitement there. They could tell I was excited and I look forward to getting to work with all those young people.”

The Panthers will start spring practice under Lowe the first or second week of May.

Lowe compiled a 49-23 record in six seasons (2006-11) at Powell in his first head coaching job. The Panthers qualified for the playoffs each year under Lowe and played in the Class 5A state championship game in 2011, falling to Henry County 17-14.

After not coaching in 2012, Lowe was hired by The King’s Academy. He had a five-year record of 30-25 and steered the Lions to an 8-4 record and the Division II-A state quarterfinals last season before falling to Nashville Christian 28-7.

Marc Weekly, TKA Vice President for Development, said: “To say Matt leaves the program better than when he arrived would be an understatement. His tireless planning and exciting brand of football put TKA into the playoff landscape.”

TKA Headmaster Walter Grubb added: “We love the style of football Matt introduced here, and we are committed to maintaining that same level of intensity … We hope to make a decision and an announcement soon, but we will be thorough in our selection process.”

At Halls, Overton stepped down after six seasons as head coach, including the first year as an interim.

“I resigned to pursue opportunities in education that do not include coaching,” he said.

Last season was Overton’s best as he guided the Red Devils to their first region title in 21 years.

“We were not a good football team the first couple weeks of season, but we were playing our best at end of year because of our players’ commitment to each other,” said Overton.

Meagan Booth, Halls’ athletic director, stated: “We hate to see Coach Overton leave coaching. He’s a top-notch coach, educator and all around great guy. Halls football is without a doubt a better program now than when he took over. That vast improvement is because Coach Overton dedicated countless hours to building a great program and loving on our kids.”

Because of the region championship, added Booth, “We’ve had lots of interest (in the vacancy) and are currently making decisions on interviews. Our goal is to have a coach in place by spring practice which starts April 30.

“Our current coaching staff is doing an incredible job keeping the ship moving in the right direction until a head coach is announced.”