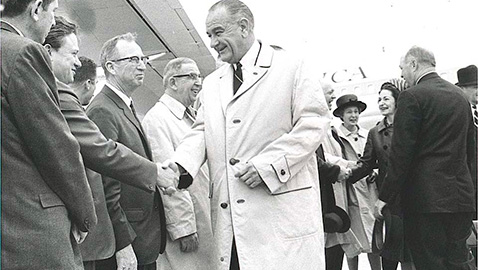 The 1964 Senate Races In Tennessee

Lyndon Baines Johnson was a remarkably able politician.  The intricacies of Johnson’s complicated personality have likely best been examined in Robert Caro’s splendid multi-volume biography of Johnson.  Much of Johnson’s legacy has been obscured and earned him scorn due to one part of that same legacy: the Vietnam War.  Johnson had succeeded John F. Kennedy when the latter was brutally murdered in Dallas, Texas.  Kennedy was in Texas in anticipation of his 1964 reelection campaign as well as to bring feuding Texas Democrats together.  Johnson, perhaps the most powerful Majority Leader in the history of the United States Senate, had known Albert Gore since Gore’s election to the U. S. Senate in 1952.  Gore’s predecessor in the Senate, Kenneth D. McKellar, had chaired the powerful Appropriations Committee and wielded enormous influence and power as one of the senatorial barons.  LBJ had paid due deference to McKellar as one of the powers inside the Senate.  Albert Gore, replacing an institution in Tennessee and one of the Senate’s most powerful members, was something of a rebel.  Gore, like his colleague Estes Kefauver, was never a senatorial baron.  Kefauver was actively disliked by many of his colleagues who thought he was an egregious publicity seeker who merely hoped lightning would strike and he could be elected president.  Albert Gore was equally ambitious, although it was not as readily apparent as it was with Kefauver.  In a newly published biography of Albert Gore, author Anthony J. Badger relates an episode of the Tennessean wondering aloud to a dinner guest why Democrats would settle for John F. Kennedy when they could have had him.

Albert Gore’s rebellious nature was not calculated to win the approval of a leader like Lyndon Johnson.  When Johnson was elected vice president in 1960, he tried to keep his power as Majority Leader inside the Senate, proposing that he preside over the Democratic Caucus.  Albert Gore vociferously objected and while Johnson won the vote, it was such a public humiliation he never again attended a meeting of the caucus.

Being the politician that he was, nobody knew better than Lyndon Johnson that his Civil Rights Act of 1964 had impaired, if not completely diminished, his political standing in the South.  There are those who say LBJ understood the South would eventually leave the Democratic Party and initial polling in Tennessee indicated Barry Goldwater, Johnson’s Republican opponent in 1964, was ahead by more than twenty points.

Oftentimes those legislators who are legislative craftsmen or excellent political strategists are not particularly potent political campaigners; Lyndon Johnson not only knew how to run for an office, he excelled at it.  Lyndon Johnson decided to invade the home territory of his opposition in Tennessee.  It was announced the President was coming to Knoxville to speak in May of 1964.  It would be the first presidential visit to Knoxville in twenty-four years since Franklin Roosevelt had made a stop in the city in 1940.

Judge Howard Bozeman, a Democrat, said the courthouse would close at 2 p.m. the day of Johnson’s visit to give employees the opportunity to see the President.  The Chamber of Commerce hastened to assemble press kits with information about Knoxville for the benefit of the national press that trailed in the wake of a presidential visit.

Once in Knoxville, Lyndon Johnson’s Secret Service detail had a difficult time keeping up with him.  A crowd numbering between 12,000 – 15,000 people awaited Air Force One when the jet finally arrived at McGhee – Tyson Airport at 2:49 p.m.  Johnson dutifully greeted the assembled local dignitaries, which included Knoxville mayor John J. Duncan, who presented the President with a key to the city.  The President shook hands with Duncan’s daughter Becky (now state senator Becky Duncan Massey) and LBJ seemed ready to head to his waiting limousine when he appeared to change his mind and decided to shake hands with people standing behind a nearby fence.  Johnson worked the crowd, shaking hands and allowing people to touch his hands and arms as he moved down the length of the fence.  LBJ rejected the cream-colored car intended for his drive to Knoxville and instead settled into an open convertible, much to the annoyance of the Secret Service.  Johnson’s daughter Lynda Bird, climbed into the convertible, as did Governor and Mrs. Frank Clement.  Knoxville Journal reporter Raymond Flowers wrote one Secret Service agent had lamented Lyndon Baines Johnson was the hardest man to guard in his experience.

In a spontaneous remark, Lyndon Johnson told a clearly delighted group of Knoxvillians, “If there had not been a Tennessee, there would not have been a Texas.”  LBJ paid tribute to the representation Tennessee had sent to Congress for decades, saying Volunteer State senators and congressmen had achieved vital and important positions in governmental affairs, enabling them to render a real service to the people of Tennessee.  Raymond Flowers, one of the contemporary observers of Lyndon Johnson’s arrival in Knoxville wrote, “To the observer at the airport yesterday, the President appeared to be a man who enjoys his job immensely and who loves crowds and the attention that goes with that responsibility.”

Some 7200 people heard President Johnson speak at the Municipal Coliseum and gathered on the dais were Knox County Judge C. Howard Bozeman, Mayor John Duncan, Governor Frank Clement, and senators Albert Gore and Herbert S. Walters, who had been appointed to succeed the late Estes Kefauver in August of 1963.  Johnson’s remarks were tailored for his local audience and the President said his war on poverty would help to clean up the area around the Municipal Coliseum where they had gathered.  Johnson mentioned while they were in a “beautiful new building” he “saw people as poverty-stricken as any in the United States” on his ride to the Coliseum.  Johnson firmly said those improvements would come for people irrespective of their color, race, creed or religion.  Johnson struck at his political opponents, saying “those who oppose us are determined people.”  President Johnson told his audience just a week earlier, on the floor of the U. S. House of Representatives, one congressman had called the war on poverty a “cruel hoax.”

“They are seeking right now to delay and divide and deter our efforts to bring equal opportunities to all Americans,” Lyndon Johnson told Knoxvillians.  “If those men had had their way 30 years ago, the TVA would not today be the world’s shining example of how government and free enterprise can work hand-in-hand to help people.”

Johnson, a master storyteller and raconteur, used earthy humor to illustrate his point, telling his audience, “And someone told me of the unemployed railroad worker near Jellico who said to a reporter, ‘Up in my part of the country, things are so rough, the river only runs twice a week.’”

Johnson reminded his listeners that it had been Tennessee who had produced the first president of Texas, Sam Houston, as well as the late Speaker of the House, Sam Rayburn.  Johnson continued his theme and said, “You should be disturbed by the fact that of the 100 graduates of LaFollette High School in 1952, only three still live in Campbell County.  They left not because of any lost love for Campbell County, but because of lost opportunities.  They moved in searching for jobs – – – and searching for the security and dignity that comes from working.”

“They are not alone,” Johnson reminded his audience.  “Two-thirds of the membership of an electrical union headquartered in Knoxville has been forced to seek work outside of this area.”

President Johnson said in a wealthy society like the United States, “I find it hard to believe that one-fifth of our population has been left behind in misery and want.  Surely the wealthiest and most powerful country in the world should be able to give every man who wants to work a chance to find a decent job – – – a chance to earn a decent wage – – – a chance to provide a decent living for his family.”  Johnson paused and then said, “This can be done and this administration is going to do it.”

Perhaps the most memorable aspect of Lyndon Johnson’s trip to Knoxville was the President’s impromptu stop of his motorcade along Riverside Drive.  As his car approached 206 Riverside Drive, Johnson bellowed, “Stop right here!”  Curious onlookers had gathered on the porch of the house and watched as the President of the United States got out of his car.  Governor Frank Clement followed, as did Secret Service agents.  Harrison Moore was fifty-one years old and an unemployed laborer and father.  Johnson thrust out his hand to Moore and barked, “How are you?”  Harrison Moore had hardly murmured a reply when the President asked, “What’s your wife’s name?”  Moore’s twelve-year-old son, Bobby, was a student at Bell House School and ironically, scheduled to leave that same morning for Washington, D. C. as a member of his school’s safety patrol.  Bobby didn’t get to shake hands with LBJ and told delighted reporters, “I guess I’ll have to follow him to Washington to meet him.”

Later, the neighbors and friends who had gathered around the Moore home could not even recall that Governor Frank Clement had been present.  LBJ’s spontaneous desire to meet the residents of Harrison Moore’s house made a profound impression on those who did greet the President.  Elated, Moore quipped, “I don’t know if I’ll ever wash this hand again.”

Once again surprising his Secret Service detail, Lyndon Johnson strode “to the nearby Riverside Apartments” where an astonished Zelma Lawson sat on the steps of the building with her 11-month old granddaughter, Susan Ann, and a group of youngsters.  Evidently little Susan Ann needed surgery and Mrs. Lawson recounted to reporters that Governor Clement had quietly told her “to have our grandbaby’s head operated on and he’d see she had the best medical care.”  Johnson paused to give two boys quarters before loping back to his car.

People lined the streets as children waved small American flags as President Johnson’s motorcade passed slowly by on its way to the Municipal Coliseum.  Johnson, never passive, waved back to the smiling faces peering to get a look at him.  The Powell High School band blared a march as the President’s motorcade passed.  Both sides of Main Street and Central Avenue were lined with people all the way to the Municipal Coliseum.  Many people had been standing to catch a glimpse of Johnson for more than two hours.  Some carried small radios to listen to the reports of the President’s progress.  Others clutched cameras, hoping to snap a picture of President Johnson.  As Johnson’s car “raced up to the Coliseum” Secret Service agents blocked the ramp leading to the entrance while the President disembarked from his automobile and hurried inside.

Tennessee was changing still.  E. H. Crump had been dead for a decade.  His personal friend and political partner Senator K. D. McKellar had been defeated in 1952 and died five years later.  The decade of the 1950s had belonged to Estes Kefauver, Frank Clement and Albert Gore, but that, too, was changing.  Kefauver was dead, while Clement and Gore remained in office.  Republicans had carried Tennessee in the last three presidential elections and it would take a real effort on the part of Democrats to keep the Volunteer State from going Republican once again.

Lyndon Johnson, President of the United States, had just kicked off the general election campaign in Tennessee with his visit to Knoxville.