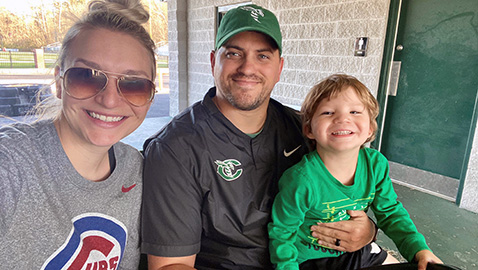 There’s a new excitement in the air for Carter High football.

“Communication with my players and culture really are the main things I harp on,” said Justin Pressley, the school’s new head coach, last Wednesday. “One of the reasons I think I got the job at Carter was I’m going to bring a positive and energetic culture to Carter, something they have wanted for a while.”

“My biggest thing is we just want to brand Carter to be an exciting football experience for high schoolers,” added Pressley, who previously was head coach at Volunteer High in Church Hill (2018-19) and at Lindblom Academy in Chicago (2015-17). “That’s kind of what I’ve done everywhere I’ve been. That’s definitely something that you get unique out of me as a head coach – bringing a culture that’s going to get all the kids excited. I’m going to get more kids out for the football team than ever before. That’s going to be our goal.

“We’re going to give the kids a college-like atmosphere on the field and off the field as much as we possibly can.”

Pressley also wants his coaches and players to understand that football is just a game.

“We want our families to be our No. 1 priority, then our academics and football,” he said.

Pressley has been impressed with the Carter players’ resiliency.

“Taking to a new coach I thought was going to be the biggest challenge with this bunch, but they took to me right away and they welcomed me right away. Everything we’re doing as a staff and trying to form a culture at Carter, they all bought into it. To me that shows a major resiliency with those kids that they can adapt and change and evolve quicker than anyone.”

It also appears to show that the seniors and veteran players on the team have good attitudes and leadership qualities to bounce back like they have.

Pressley called it “incredible” how the players have responded.

“It’s helped me a lot in the transition,” he said. “I did feel that would be a challenge coming in – getting the kids to believe and buy in to what I’m selling and they did that right away. No problems.”

Pressley, who played high school football at Midway High in Roane County, took the Carter job in January. He made the move to Knoxville with his family in February.

“I really only got about 30 days with the players before this (coronavirus pandemic) happened,” he said. “We couldn’t have spring practice. When we got back (for preseason workouts) our goal was just to get to know the kids.

“I felt we made good strides … I think our kids and our staff have a great relationship. We picked up a lot of momentum going into the dead period. We’re real excited to get back with them on Monday.”