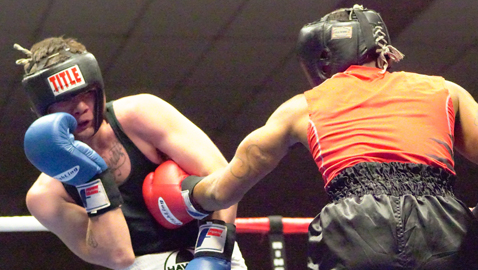 Cody Pridemore, who represented the Knoxville team franchise in this year’s Southern Golden Gloves tournament, is starting down a new path in his boxing career.

“I’m turning pro,” said Pridemore after losing by decision in the 152-pound finals of the Southern tournament April 22.

“I’m planning on fighting in June in Chattanooga. I’m going to cut down to 140 pounds, the super lightweight division.”

Pridemore, the East Tennessee Golden Gloves champ from Johnson City and coached by Scott Vance, lost by decision to Sean Charleston of Georgia, who was named “Best Boxer” of the tournament and led his state to the team title.

Pridemore, a Science Hill High School graduate, felt like he had an advantage of fighting all three nights in the tourney, which was held at the “Ace” Miller Golden Gloves Arena.

Pridemore said a key to his loss in the finals was not having any upper body movement in the first two rounds.

“I sat in front of him and that’s why I got caught,” he said. “I felt like I won the third round because I was moving more lateral and had more upper body movement.”

Judge Hill, a veteran coach in the Knoxville Golden Gloves program, was impressed by Charleston.

“I think Sean Charleston has a very good chance of winning the nationals this year,” said Hill.

“I was most impressed by his conditioning and the way he goes to the body. He works very well to the body and back and forth to the head.”

Hill feels the Georgia team, which is coached by Bert Wells, is not as strong as they were last year.

The Georgia squad will represent the Knoxville team franchise in the National Golden Gloves tournament this week in Lafayette, La.

“We’ll win a few bouts, but I don’t think we’ll do as well as we have in previous years,” added Hill.

Georgia’s Raekwon Johnson was named “Best Conditioned Boxer” of the tournament. He won by decision over Jaylon Pridgeon of South Carolina in the 141-pound finals – his third win in as many nights.