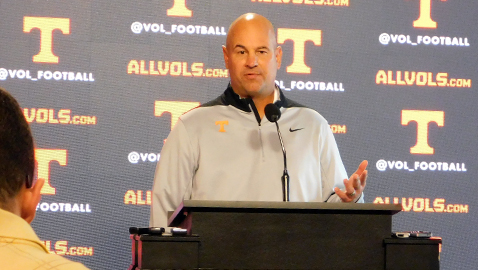 The Volunteers made it official when they opened fall camp late last week and coach Jeremy Pruitt is eager to begin his second season at the helm in Big Orange Country and he calls this the best time of the year.

“It was sitting here last night reflecting on it, I don’t know the exact number of how many fall camps this is for me, but I know one thing is, for me this is the most exciting time of the year,” said Pruitt, who inherited a program in shambles last season and managed to guide the Vols to five wins last season. “To get an opportunity to take 110 young men and to grow with the coaching staff and everybody that’s involved; and get a chance to create a team.

“Nobody knows what that team is going to be. You have to create your identity. You have to come together. And there’s lots of things that go into fall camp. It’s one of the few times that there’s not as many restrictions when it comes to the time you can spend with your players.”

At Thursday’s season-opening press conference it was evident that the Tennessee coaching staff, including Pruitt, are beaming with confidence as the Big Orange have 18 returning starters from the 2018 squad that pulled a monumental upset Southeastern Conference victory at Auburn.

And Pruitt has already put the 2017 campaign in the rear view mirror.

Tennessee may have several starters back but Pruitt said that the Volunteers must be able to continue building depth and noted that preseason training camp is a time to get back to basics and the fundamentals of football. One of those fundamentals is taking care of the football.

The Vols must protect the ball and be able to force turnovers to be successful.

Tennessee took the practice field for the first time Friday afternoon. It was the first of 28 rehearsal sessions before Tennessee welcomes Georgia State to Rocky Top.