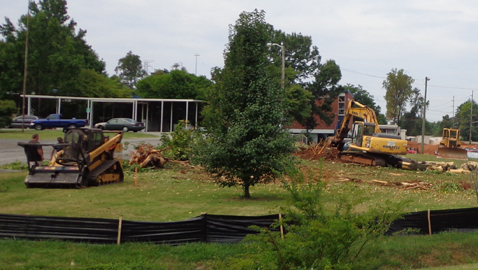 Among the many requests from Knox County Schools routinely approved by the County Commission are several resolutions to approve donations to the schools. Some of these go unnoticed but the contributions of local PTAs are notable.

For instance, Pond Gap is in the midst of construction as the modular classrooms are being replaced with brick and mortar classrooms. The playground there is pretty bare. The Pond Gap PTA raised and donated $47,600 for playground equipment. The resolution came through the school system and was among three such items passed last week by the commission.

Pond Gap’s Principal Shelly McGill told The Focus that Charlie Biggs of the Bearden Rotary Club came to her to discuss building a playground the children deserve. The playground currently only has a rusty swing and basketball goals.

“Charlie and I met with the PTA President,” she said, adding that after a Rotary Club meeting three club members came forward and “We are now building an $80,000 playground!”

The funding that includes the PTA contribution comes from the Rotary Club, Knox County Schools funds for relocating one playground, fundraising, a Read-a-Ton, a Carnival, and donations from parents and friends.

“We’ve learned a lot about the playground scene and even more about the power of a community rallying around a common mission,” she said.

Playground equipment, mulch and a shade structure were the subject of funds approved for Amherst Elementary School from a donation by the PTA there.

Other donations to schools included $150,000 from Lift Life Foundation to renovate and provide exercise equipment for Fulton High School,  $1,012,390 in a grant from Carl D. Perkins Career and Technical Education from the state Department of Education for the Knox County Schools Career and Technical Education Program, and a Focus School grant from the state for $81,884 for Chilhowee Intermediate and $59,809 for Mooreland Heights. The money supports a “gap closure” for the Title One Focus Schools.

The Commission also approved a $10,000 grant donation from the East Tennessee Foundations in support of Dolly Parton’s Imagination Library program.