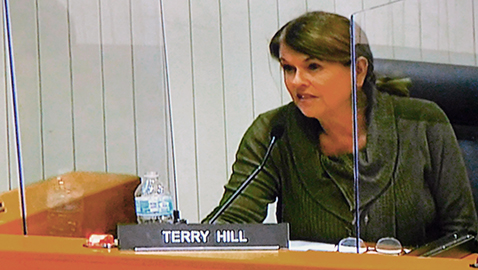 In what may be the shortest meeting in recent history the Knox County Commission altered its public forum rules last week. In past months the commission meetings have been contentious with anti-mask protesters shouting from the balcony of the main assembly room and interrupting speakers and commissioners.

Monday’s meeting began with public forum, as usual, with a handful of maskless speakers that included citizens charging they have been harassed by others for not wearing masks. One said the Board of Health is “unconstitutional” and told the commissioners, “We will hold you accountable.”

Some speakers would not give a home address and one charged the commission with giving away its responsibility to the Board of Health and the Public Building Authority. One speaker said the only way to be admitted to the meeting without a mask was to say they want to speak in the forum.

Two speakers demanded a one-on-one meeting with Knox County Health Department Director Dr. Martha Buchanan and another citizen said the restrictions are “encouraging people to snitch on each other.”

When the commission got to the agenda they discussed the new public forum rules recommended by the Rules Committee. Basically the new rules give priority to Knox County residents to speak during the forum. It permits residents to give their name and address when registering to speak and does not require speakers to give their street address at the podium.

“Nothing really has changed,” said Commissioner Carson Dailey, adding the new language does not make it harder for public comments.

Commissioner Kyle Ward suggested that the language include letting Knox County property owners who live outside Knox County be allowed to speak at forum. That was added to the rules on a motion by Commissioner Randy Smith.

Public forums are held at work sessions and regular commission meetings. Anyone living outside the county wishing to speak would be at the discretion of the chairman or commission. People must register to speak by 4 p.m. the day before the meetings or speak with the vice chairman prior to the start of the meeting. Each speaker will be given three to five minutes unless more time is approved by the commission. Commissioners or Knox County staff may ask questions of any speaker.

The commission’s rules ask that speakers show respect by speaking in a civil and courteous manner. The chair or vice chair have the authority to terminate remarks by people who are disruptive, degrading or insulting.

With the property owners amendment the commission passed the rules update unanimously.

In other business Knox County Mayor Glenn Jacobs honored two Rural Metro firemen, Alex Kennedy and Matt Kinney, for saving a life during a fire at a local home.

Jeff Bagwell, captain of Rural Metro, urged the commission to seek changes from the state to declare the commercial fire department a subscription-based response company. He said the current state regulations give all county homeowners a reduction in fire insurance rates although many do not subscribe to the service.

Commissioner Courtney Durrett presented a proclamation declaring November as Diabetes Month and noted that her daughter has been diagnosed with that disease.

District Seven Commissioner Charles Busler announced that Oak Ridge Turnpike has been designated as a Tennessee Scenic Highway. The route is also being considered as a National Historic Byway.  He also recognized Three Ridges Golf Course for its upkeep, management and participation in many fund raising events for non-profit organizations.