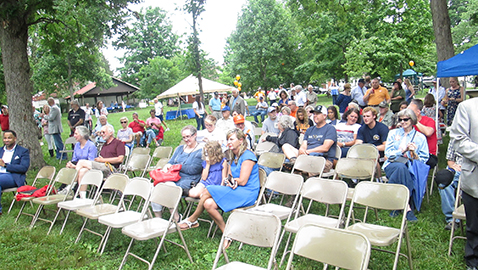 It may have rained most of Memorial Day but that didn’t deter the ceremonies at Honor Fountain City Day. Although some politicians and vendors cleared out by the time the 3 p.m. program got underway, many residents stayed and watched the patriotic program and presentation of honors to citizens who contributed time and effort to the community.

Sponsored by the Fountain City Town Hall, the 43rd Annual Honor Fountain City Day was surprised with a visit by former Governor Phil Bredesen, who spoke briefly following great applause from the crowd. Bredesen is a candidate for U. S. Senator.

“This is the kind of event I love to go to with all kinds of people, politics, and backgrounds. That’s what America is supposed to be about,” he said.

Congressional candidate and Knox County Mayor Tim Burchett also spoke briefly and honored fallen military and veterans and said that the “best hamburgers in the world are right here at Litton’s.”

Town Hall Chair Kelly Ellenburg hosted the event, noting that “A Walk in the Park” was the theme.

Each year local citizens are honored for their efforts and Bill Dohm and Patty Cooper received the Town Hall Chair’s Award for their purchase and restoration of Savage Garden and efforts at the Garden Montessori School.

Carol Evans, director of Legacy Parks, was the keynote speaker and was recognized as Fountain City Woman of the Year. The Fountain City resident told the audience that she’s lived there since 1982 and the park is the reason she chose to live there.

The Residential Restoration Award went to Chad Kiser for restoring a home at 412 Midlake on the corner of Kingwood Road.

“It was a labor of love,” Ellenburg said of the effort to prepare and present the celebration.