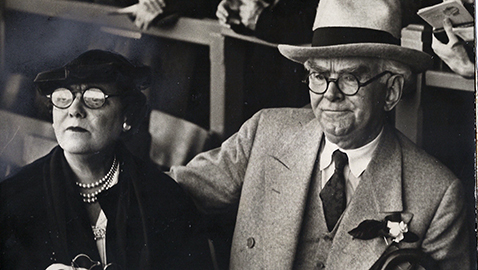 Edward Hull Crump, master of the machine that ruled Memphis and Shelby County for decades, held a variety of elected offices – – – Mayor of Memphis, county Trustee, but most have forgotten he was also elected to Congress.  Elective office was not essential to either Crump’s rule or ego; in fact, for most of his reign, E. H. Crump ruled his domain from his business office downtown without holding any elected position.

Crump had ousted an antagonistic mayor in 1927 when he fought a bitter battle with Rowlett Paine.  That particular election helped to consolidate Crump’s power in Memphis and Shelby County; to accomplish that feat, Crump struck an alliance with the black community.

A great many African-Americans in Shelby County steadfastly remained Republicans and some readily made a bargain with Crump to oust Mayor Paine.  It proved to be a poor bargain as black voters became part and parcel of the Crump machine and it eroded the strength of African-American Republicans over the years.

With the installation of Crump’s new mayor, Watkins Overton, the Memphis Boss began to think about other things.  On June 10, 1930 Edward H. Crump filed a petition to run for Congress from Tennessee’s Tenth District.  Crump’s announcement came as a surprise to virtually everyone, not the least of which was Congressman Hubert Fisher.

Fisher had served in the House of Representatives since 1917 when Kenneth D. McKellar had vacated his seat in Congress to run for the U. S. Senate.  Prior to being elected to Congress, Hubert Fisher had served as U.S. Attorney for the Western District of Tennessee, an appointment he received largely through the efforts of Congressman McKellar.  Only fifty-three years old at the time, Fisher was stunned by Crump’s announcement, which drew banner headlines across the state.  Crump did not bother to tell Congressman Fisher he was running.

Once the Memphis Boss qualified for Congress, Hubert Fisher sent a wire from Washington stating “if Mr. Crump is a candidate for this office, I am not to be considered as such.”  There was little Fisher could do save for step aside.  Increasingly deaf, Fisher retired from the profession of law and Congress and engaged in the nursery business.

Crump did not merely enter the Congressional race, but arrived with a program, which he immediately announced.  The Memphis Boss said he would “vote and work for educational advancement, education being the basis of all progress.”  It was Crump’s opinion education merited “money, time and real labor” in abundance.

Moreover Crump believed “the United States government should cooperate with every city, county and state in their educational programs.”

The Memphis Boss said if he was elected to Congress his “sincere efforts” would be given to “aid industry, agriculture and good roads” all of which was essential to “the progress and prosperity of the country.”

Crump promised to help veterans “for they did heroic and patriotic work most unselfishly” as well a labor.  Crump did say he was “unalterably opposed to the high tariff being foisted on the people by the Republican party at the behest of big and tremendous money interests.”

The election was a mere formality.  Crump did have a Republican opponent, one Herbert Harper, in the general election.  Crump crushed Harper.  Prior to taking the oath of office, Congressman-elect E. H. Crump was more concerned with events taking place in Tennessee.

Crump had endorsed Governor Henry Horton, saying, “I will vote for Governor Horton with the greatest pleasure and I hope every taxpayer and citizen in this community will show his or her appreciation for the assistance he has given us by rolling up a tremendous majority for him in the August primary.”

Crump had predicted the governor’s opponent would not carry a single precinct in Shelby County.  Since Crump’s warm endorsement of Henry Horton, the State of Tennessee had lost the bulk of its money, which the governor had placed in the care of Rogers Caldwell.  The House of Caldwell failed after the stock market crash and the taxpayers’ money evaporated over night.

Naturally, Tennesseans were livid and Crump declared, “This present crisis is a bitter disappointment.  Confidence must be restored in the government of Tennessee.”

The Shelby County delegation in the Tennessee General Assembly would make every effort to impeach Governor Horton upon the express instructions of E. H. Crump.  The alliance with Henry Horton had been temporary in any event.

Horton was under the influence of former U. S. senator Luke Lea, whom Crump cordially hated.  It likely did not bother the Memphis Boss in the least to turn his fury on Governor Horton and Crump was disappointed when the effort to impeach Horton failed only narrowly.

Crump was present when Scott P. Fitzhugh of Memphis was fighting a close battle with W. K. Selmer of Selmer for the speakership of the State Senate.  After a deadlock and numerous ballots, Fitzhugh was finally elected.  Congressman-elect Crump was sitting nearby when Fitzhugh made his acceptance speech.

Naturally, Crump’s arrival in Nashville did not escape the notice of the news media.  Quizzed about why he was at the State Capitol, Crump replied, “I’m interested in the investigation (of Governor Horton) and also anything that might be corrective in the management of the state’s affairs.  Then I’m through.”  The Memphis Boss swatted away any notion he would attempt to “dictate” the running of Tennessee’s government.

“The state has a governor and a legislature elected by the people,” Crump snapped.  “It would be poor taste on my part to even presume to try and suggest or dictate how state affairs should be run.”

It was not long before Congressman Crump had fallen out with Senate Speaker Scott Fitzhugh.  The cause of the break was oddly a relatively minor bill considered by the legislature regarding the showing of movies on Sundays in Memphis.

Crump did not like the bill, which Fitzhugh supported.  Fitzhugh, along with Speaker of the House Walter “Pete” Haynes traveled to Memphis to meet with Crump personally in an attempt to resolve the differences between the senator and the Boss.

Evidently, the trip was unsuccessful and rumors continued to swirl around the breach between E. H. Crump and Scott Fitzhugh.  Crump’s difficulties with Speaker Fitzhugh did nothing to facilitate the investigation of Governor Henry Horton’s administration and the loss of most of Tennessee’s money.

Crump returned to Nashville and issued a sizzling statement as banks across Tennessee failed.  The Memphis Boss flayed Rogers Caldwell and Luke Lea, who was a business partner of the House of Caldwell.

“Every individual who has stuck his wicked claws into the state’s affairs for personal gain, whether he be Luke Lea, Rogers Caldwell or anyone else, should be dealt with most severely, just as the poor ragged individual is handled in the criminal courts every day and given a free ride on the long chain,” Crump cried.

Crump complained, “The governor of our state, Henry H. Horton, sat in his office, supine and docile, an easy prey for designing, selfish interests, gougers in the taxpayers’ money, and has permitted possible mismanagement of commonwealth affairs.”

Using his typically colorful language, the Memphis Boss thundered, “The result of this colorless and inefficient non-executive’s feeble attempt to run the state makes it clear that he was possessed solely with the illuminating and brilliant idea of being governor in name only.”

Crump snarled Treasurer John Nolan “by his own admission” was utterly “unfit to handle the taxpayers’ money.”

Crump described State Comptroller Edgar Graham as “dear, dumb and blind” and noted “says nothing, does nothing, and practically admits he is nothing.”

As E. H. Crump was giving his enemies hell, Governor Henry Horton was issuing his own statement, insisting he would never resign his office.  “I shall not resign.  I will stand, answer and defend until the end,” Governor Horton said.

The governor also had a few choice words for Crump, who had just taken the oath of office as the Congressman from Tennessee’s Tenth District.  “Mr. E. H. Crump, the political purist and loud shouting moral uplifter, has come to Nashville with his usual bodyguard and issued his manifesto, bearing all the earmarks of a Mexican revolutionist, demanding that I be impeached, seeking to direct and coerce the legislature and have himself declared the imperial dictator of Tennessee.  He demands and commands that this be done now.”

Governor Horton then sounded his note of defiance.  “I will not be impeached and Tennessee will not be humiliated and disgraced by this impudent political boss.”

Horton snapped, “I shall not plead guilty to those articles and resign as Mr. Crump did when ouster proceedings were filed against him as mayor of Memphis in 1915 for a violation of his oath of office…”

One causality of the war with Governor Horton and the movie bill was Senate Speaker Scott Fitzhugh who resigned in May of 1931.

By June the Nashville Tennessean proclaimed in headlines “Crump Machine Nears Rocks…”  The Tennessean, owned by Crump’s political opponent Luke Lea, had a “roving political reporter” who claimed Crump’s organization was ready to revolt due to the Memphis Boss’s “bad generalship.”  It was wishful thinking on the part of the Tennessean as Crump remained completely in control in Memphis and Shelby County.

Crump trumpeted his prediction Mayor Watkins Overton would easily be reelected.  “The opposition, such as it is, who usually plan without planning, and are loud noise but weak doctrine, could not beat Mayor Overton and other four commissioners if they had every officer at the polls and the state guard to back them up,” Crump boasted.

“We have never failed at the polls,” Crump reminded a reporter.  That statement was not quite true; Clifford Davis, backed by the Ku Klux Klan, was so personally popular, he had managed to win election over Crump’s opposition.

The effort to oust Governor Henry Horton failed only narrowly in the state legislature.  Luke Lea and Henry Horton used the power of the governor’s office ruthlessly to remain in office.  Lea’s newspaper labored mightily to frighten the people of Tennessee by raising the specter of Ed Crump running the state government should Horton be impeached.

Crump had eased into his new responsibilities as congressman for Tennessee’s Tenth District.  In late June of 1931, Congressman Crump sent a wire to President Herbert Hoover endorsing the chief executive’s war debt proposal.

Crump urged his colleagues in the House of Representatives to support the President’s plan irrespective of political party.  Crump stated economic conditions in the world warranted “the rich American government in postponing the payment of all inter-governmental debts for one year.”

Crump, a highly successful businessman, likely knew all too well the governments across the globe could not and would not keep up with their payments to the United States for debts incurred during World War I.

Crump was one of many luminaries invited to a barbecue held at the farm owned by labor leader George L. Berry in East Tennessee honoring senior United States senator Kenneth D. McKellar.  Crump, like McKellar, was an early supporter of New York governor Franklin D. Roosevelt for the Democratic presidential nomination.

Crump announced his support for Roosevelt on September 26, 1931.  The Memphis Boss said a “Roosevelt for president club” was being formed in Shelby County.  Mayor Watkins Overton, standing beside Crump, was wearing a lapel pin declaring “America calls for another Roosevelt.”

Roosevelt’s march toward the Democratic nomination was impeded by 1928 standard-bearer and former New York governor Alfred E. Smith; Crump stated he thought while Smith “would make a fine United States senator from New York” or perhaps a Cabinet officer but added, “I don’t believe he can be elected president.”

For much of the next year, Ed Crump would make it a personal priority to elect Franklin D. Roosevelt President of the United States.