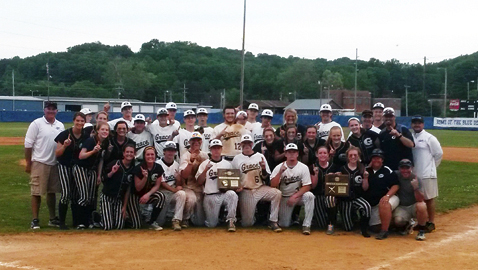 District Champs: Player from the Rams and Lady Rams celebrate their baseball and softball district championships Thursday night. The Grace baseball team won the District 3-A Championship with a 4-0 win over Midway.
The Lady Rams won their third consecutive title by outlasting Meigs County 3-2. Both tournaments were contested at Harriman High School.

The Rams, who had to come through the loser’s bracket, clinched the title with a 4-0 win over Midway Thursday night at Harriman High School.

“I’m extremely proud of our guys,” said Mitch Turner, GCA’s first-year coach. “We had to come from the loser’s bracket and I told the guys that if anybody could do it, we could because we had the pitching.”

It was the Rams’ pitching that took center stage Thursday night as Tanner Fee hurled a four-hit shutout. He needed just 62 pitches (including 52 strikes) to nab a complete-game victory. He walked one and struck out six in seven innings.

The Rams scored three runs in the second inning. Caleb Savage opened the frame with a double. First baseman Josh Liford followed with a walk before Luke Shepherd singled to load the bases.

Courtesy runner Nathan Atkinson scored the game’s first run on a passed ball to give the Rams, who host Oakdale in a Region 2-A game today at 6 p.m., a 1-0 lead.

Grace Christian senior right fielder Caleb Walker then successfully executed a safety squeeze and drove in Liford. A Midway error on the play allowed Shepherd to score and give the Rams a 3-0 lead.

The Rams had to win three games in two days to claim the district championship. Grace opened the tournament with a 6-1 win over host Harriman. The Rams then dropped a 7-4 decision to Midway. In that game, Liford struggled on the mound.

He would, however, respond. In Grace’s first loser’s bracket game, Turner had his senior slated to play designated hitter. After a chat, Turner put the senior in the field.

“I told him, ‘we have another guy on the team who’s playing better than you right now.”

Liford then told his coach that he wouldn’t regret letting him play in the field. He then delivered and took the Rams to the championship round.

“The kid just went off,” Turner said. “He had five or six hits and drove in five or six runs.”

Grace beat Meigs County 14-2 before sweeping Midway in the championship series. The Rams prevailed in a 12-7 slugfest to force Thursday’s game.”

Last week was a busy one for the Rams in Harriman. When they weren’t on the field, they were cheerleaders for the Lady Rams softball team, which also won a district title Thursday night.

“It was big for our teams to both be playing at the same location,” Turner said. “We were doing laps between the baseball and softball fields.

“Our athletic department is one big family.”