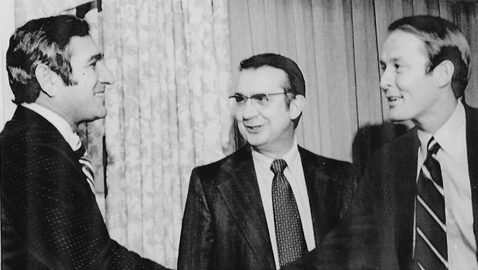 After having lost the 1972 race for the U. S. Senate to incumbent Howard Baker by a wide margin, Ray Blanton found himself out of Congress. Blanton returned to Tennessee and immediately began planting the seeds for an expected bid for the Democratic gubernatorial nomination in 1974.

Democrats were shocked by the extent of Howard Baker’s victory and began to worry regaining the governor’s office might not be as easy as they had imagined. Governor Winfield Dunn was constitutionally prohibited from running for a second term in 1974 and there were any number of ambitious Democrats who longed to be governor. For that matter, there were more than a few Republicans who harbored gubernatorial ambitions.

The one thing Ray Blanton had accomplished during his senatorial bid was unifying the fractured Democratic Party in Tennessee. Warring factions were hardly new in either Tennessee or the Democratic Party; yet for fifty years, the Volunteer State had been almost entirely a one-party state. Bitter fights mattered little when they were settled with finality in the primary. With the Republicans a real threat, factionalism had led to a series of stunning defeats for Tennessee Democrats. The sudden death of Senator Estes Kefauver had sparked a fierce primary contest between Governor Frank Clement and Congressman Ross Bass. Bass had gone on to win the special election over Howard Baker in 1964, but the race was uncomfortably close. Memphis Republican Dan Kuykendall had won more than 46% of the vote in the 1964 general election against Albert Gore for Tennessee’s other Senate seat. By 1973, Republicans occupied the governorship, both Senate seats, and five out of eight congressional seats. Some Democrats worried that if Ray Blanton had indeed unified the Democratic Party and still lost by almost 275,000, what were the prospects for victory against a similarly united Republican Party in 1974?

Blanton’s senatorial candidacy had been endorsed by Alabama governor George Wallace just before the election and Senator Baker won somewhere between 35% – 40% of the black vote. While Blanton did win a healthy majority of the African-American vote in Tennessee, it was hardly enough to carry him to victory.

Ray Blanton, along with a host of other prospective candidates for governor attended a Democratic rally in upper East Tennessee near Thanksgiving in 1973. Stan Snodgrass, who had run for governor in 1970, was present, along with State Treasurer Tom Wiseman and state Attorney General David Pack. Lieutenant Governor John Wilder was seen shaking hands with anyone and everyone. Jim McKinney was there, but his own gubernatorial ambitions had suffered a major setback when he was deposed as Speaker of the Tennessee House of Representatives by Ned McWherter. The mayor of Waverly, Tennessee, Jimmy Powers, worked the crowd, as did a newcomer, Jake Butcher.

All of the would-be candidates were introduced, save for Butcher, yet the banker worked the crowd like an expert. The newly elected Chairman of the Tennessee Democratic Party, Jim Sasser, was on hand as well.

In January of 1974, Ellis Binkley, the political reporter for the Kingsport Times, wrote that he had recently ridden with Senator Howard Baker from Johnson City to Kingsport. During the ride, they naturally talked politics. Senator Baker felt the GOP could retain the governorship and believed the Republicans could field a superlative candidate. Baker worried that Congressman Dan Kuykendall might have some trouble being reelected. Kuykendall, a loquacious man, was often referred to as “Tennessee’s Talking Horse.” Senator Baker also expressed some concern for newly elected Congressman Robin Beard if Ray Blanton opted to run for his old seat in the House of Representatives.

It was soon readily apparent Blanton had no interest in returning to Congress.

Baker was then a member of the Senate’s special Watergate Committee and he had not assessed the potential damage to the party of Richard Nixon. Watergate and the fall of Richard Nixon was to have serious political repercussions for the Republican Party nationally and in Tennessee.

Ray Blanton announced his candidacy for the Democratic nomination for governor on May 7, 1974 with a media splash, holding news conferences all across Tennessee.

Citing the fact he had traveled extensively across the Volunteer State, Blanton said, “The people of Tennessee have asked me to seek the high office of Governor.”

It was clear Ray Blanton intended to wage a populist campaign, noting his concern about “high prices getting higher” and said he had always had kept an open line of communication with the people he represented. Blanton promised “that policy will never change when I am elected governor, because I am absolutely convinced that person-to-person communication is the only source of true representation for the people of this state.”

That was a particularly ironic pledge considering the imperial nature of Ray Blanton’s governorship.

Blanton was the sixth Democrat to officially enter the gubernatorial contest and had to share headlines with Republican Nat Winston who said he would contest the GOP nomination for governor.

Blanton said, “Right now we’re getting to the point that we put public offices up for sale.”

The former congressman admitted all politicians were suspect in the eyes of the public, but declared that it would be futile for Democrats to attempt to use the Watergate issue as it would be “whipping a horse after the horse is dead.”

Blanton would change his mind in the general election contest with Lamar Alexander.

The primary campaign produced some campaign jingles by country music legends. Tammy Wynette sang a version of her famous Stand By Your Man on behalf of Tom Wiseman. Yet it was Dottie West’s song for Ray Blanton that is still remembered today. West adapted Country Sunshine to Ray of Blanton Sunshine. A later song, Pardon Me Ray had Tennesseans laughing just a few later.

The primary campaign soon became heated. Former Attorney General David Pack charged that he possessed evidence that at least one of his opponents was engaging in vote buying.

Former Senator Ross Bass’s brother, Horace, complained the Bass campaign’s lack of money was due to the fact they had “conducted an honest ‘take it to the people’ campaign. There has been no vulgar display of wild money splurges, no liquor parties, no big steak dinners. We have spent our money in a very responsible fashion by not trying to buy ‘political endorsements’. “Nor have we invaded the sanctity of churches to make a pitch for votes.”

Stan Snodgrass reminded voters one candidate had been accused of having accepted illegal contributions. Snodgrass also noted that Tom Wiseman was “under a cloud of suspicion for the way he ran the state Treasurer’s office.”

Blanton stressed his intention to “make Tennessee an invitation for industry” if elected governor and yes, Blanton regularly mangled the English language something Knoxville’s own Victor Ashe once offered to help him with.

One of the few issues in the primary that generated interest and debate amongst the contenders was the death penalty while attending the West Tennessee Mayor’s Association. When queried about supporting the death penalty, Ross Bass replied, “I had rather not be governor than have to kill anybody.”

The moderator had asked any of the six candidates attending the meeting if he opposed the death penalty to stand up. After a few moments of silence, Bass slowly came to his feet. Wearing a seersucker suit in the sweltering West Tennessee summer, Bass sorrowfully said, “If ever I had you, I’m about to lose you.”

Bass was forthright in his opposition to the death penalty, saying, “If the state of Tennessee were to pass a law that would meet Supreme Court requirements and would require capital punishment, this man could not pull the lever.”

“If I had the power to save that life, I’d have to save it,” Bass confessed.

The reception to Senator Bass’s honesty was icy silence from the mayors. The only person who literally applauded Bass’s comments was attorney Jim Emison of Alamo.

The former senator added, “I have had dreams occasionally because I had to drop a few bombs during World War II. I don’t know where the bombs hit, but I hope to God they didn’t hit anybody.”

Ray Blanton told the mayors he was opposed to the way capital punishment had been employed in the past, but felt some form of capital punishment was necessary, if for no other reason as a deterrent to crime. Blanton’s view was echoed by Hudley Crockett and Jimmy Powers. Jake Butcher had already left the meeting before the question was posed and Stan Snodgrass said nothing at all.

Blanton used the opportunity to declare his dislike of revenue sharing (which had been sponsored by Senator Howard Baker). The former congressman believed his views had been proven over time, growling, “Tennessee is 50th out of the 50 states in the amount of revenue that is being shared.”

Powers, the mayor of Waverly, Tennessee, sharply disagreed with Blanton.

“Revenue sharing has been a wonderful thing for Tennessee,” he said. “The thing that has hurt the municipalities in Tennessee is the impoundment of funds by the President.”

Jake Butcher, in his comments before leaving, admitted he had no record on which to campaign, but promised that were he to be elected governor, he would “work with all my efforts to insure that state government will work with all municipalities in the state.”

By July Ray Blanton was ahead in the polls, but the former congressman admitted that might only be the result of his having run a statewide race two years previously and boosted his name recognition. Jake Butcher and Franklin Haney poured money into the campaign, concentrating on media. According to official campaign disclosures, Haney outspent all of his competitors.

Just about everybody thought the primary election would be very close and each of the candidates worked hard to squeeze out every vote possible. Ross Bass was interviewed on a handshaking tour and the reporter noticed the former senator’s right hand was swollen.

“It got so bad sometimes he’d have to pack it in ice,” Bass said. “So I’m not complaining. People instinctively reach out and we automatically respond. The personal touch means a lot.”

Bass noted his name came first on the ballot among twelve candidates and his advertising pointedly mentioned he was the only candidate running who had won a statewide race.

“So a name like Ross Bass should be worth a few votes,” he chuckled.

As it turned out, it was worth far fewer than he might have imagined. At fifty-eight, Bass was past his political prime and those speculating on the closeness of the Democratic primary were not disappointed.

Ray Blanton won by an eyelash with less than 23% of the vote. Jake Butcher was close behind with just over 20% of the vote. Franklin Haney, the biggest spender in the primary campaign ran fifth, winning slightly less than 13% of the vote. Former senator Ross Bass won only 26,091 votes, running seventh in a field of twelve candidates.

Blanton owed his victory to his showing in his native West Tennessee. A beaming Ray Blanton was greeted by his mother and wife as he arrived at his campaign headquarters. Blanton was photographed receiving a kiss from both his wife and mother.

Ray Blanton was ready to embark on his second statewide race in two years.